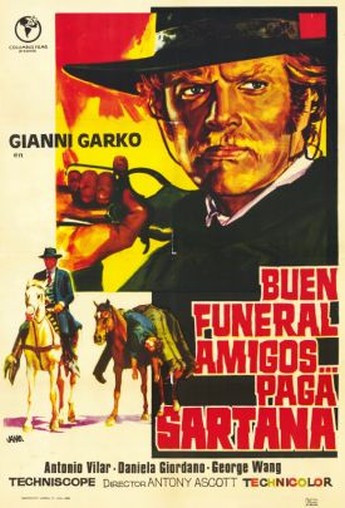 After watching one of the faux-Santana flicks, I thought I’d dip my toe into the water with the real thing. And, as I noted in my previous review, how can you possibly resist watching something with a title like that? Impressively, it’s pretty good, anchored as much by an interesting and well-written plot. Bounty-hunter Sartana (Garko) witnesses the massacre of a group of prospectors, but when he brings back the bodies of those responsible, he discovers it’s just the tip of the iceberg, and there’s an opportunity for additional reward.

The niece (Giordano) of the main victim shows up, and the local banker tries to convince her to sell her inheritance to him, since it’s basically a worthless tract of land. His enthusiasm for that should tip you off that things aren’t quite as they seem there, and he doesn’t take too kindly to Sartana taking the young woman’s side. Of course, deciding to get rid of Sartana and actually doing so, are two entirely different things, and the town undertaker is kept fully occupied while he’s in town.

It’s surprisingly smart, with people generally behaving in ways that are reasonable, rather than required by the plot, and I was also impressed by the attention paid to developing the characters. Perhaps the most surprising is Wang, who plays the Chinese owner of a gambling house: while he could certainly be described as a collection of Asian stereotypes, quoting Confucius every 10 seconds, his mere existence in a significant role is noteworthy, considering this was 1968, the same decade Hollywood was using Mickey Rooney in yellowface.

There are a few moments which seem to have strayed in from other movies, giving proceedings a certain unevenness of tone, and Bruno Nicolai’s score has one riff which perpetually seems like it’s about to combust spontaneously. But it’s hard to dislike someone like Sartana, who can embed a playing card in the wall with a flick of his wrist, or a film where coffins are, more than once, an integral part of the action.