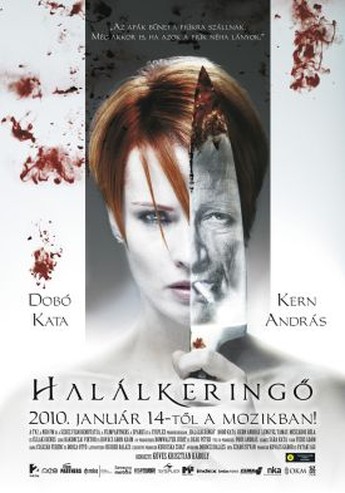 The heavily-pregnant Elza (Dobó) wakes up in her apartment, but almost immediately realizes something is wrong. Her father is in the kitchen, cooking, and offers her coffee and a “quiet chat”. We flash back to his arrival, seeking redemption for his poor parental skills, bearing a birthday cake and an alleged terminal illness, which interrupted Elza dipping into the stash she was holding for drug-dealer Alex (Lengyel), who is on his way back to pick it up, with dire warnings as to what will happen if it’s even a gram short. The discussion with her father sheds light on what brought her to that point, but also reveals some other mysterious elements, such as a bugging device apparently planted in her living-room. Who put it there, and for what purpose? We then flashback further, to Elza waking up that morning and arguing with her boyfriend, Patrik (Mészáros), a cop who has a somewhat murky relationship with Alex, and we see how things progressed from that point forward.

Yep, it’s as complicated as it sounds, and I must confess, it always feels like a cheat when a film-maker screws with the timeline, purely to withhold information from the audience which would allow them to make sense of what’s going on. Given the film takes place entirely in one apartment, it almost feels like a play, but Károly has an unfortunate tendency, feeling the need to jazz up the dialogue with overly-aggressive camerawork. This occasionally works – there’s a nice conversation between father and daughter through a bathroom door, as the POV circles around them, but when he tries to reproduce it later, in a three-way discussion, it’s far more a distraction than an addition. That’s a shame, as the performances are good, with both Dobó and Kern taking characters who could very easily be utterly unlikable, and imbuing them with interesting depths: you may not necessarily agree with their actions, yet can see a justification for them. By the end, however, it seems even the director has had enough of them, going by the rather off-hand way in which they’re dispatched. If not unfitting, it’s still a somewhat unsatisfying way to tie up the loose ends.