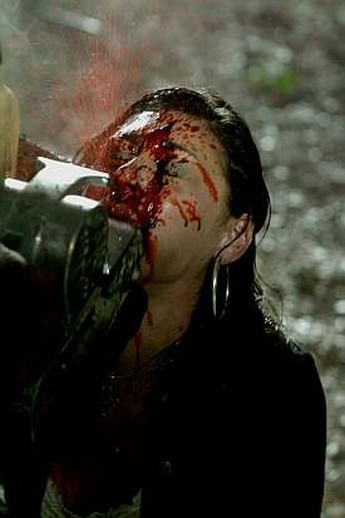 One certainly has to respect any movie with the tagline, “It’s not a sequel. It’s not a remake. And it’s not based on a Japanese one.” However, on the other hand, any movie where Harry Knowles drools, “Victor Crowley is the next icon of horror…” Well, we’ve all been burned by Knowles’ fanboy hysteria. The truth, as in most things, is somewhere in the middle. Deformed psycho-killer Vincent Crowley (Hodder) is hardly worthy of mention alongside the likes of Pinhead or Freddy, even though Robert Englund shows up as a cameo in the opening scene [then collects his cheque and leaves]. But for what is basically a warmed-over rehash of cliches from twenty or more years ago, it’s surprisingly painless. Green’s script has enough wit to keep things entertaining, as it shepherds the cast of stereotypes through the Louisiana backwoods and swamps, to be picked of by Crowley in some impressive, spectacular ways [credit John Buecher for those]. So, we have the girl with the past; the old married couple; the ethnic minorities; the porn starlets, etc. If you can’t work out who’ll survive to the end – and which of the preceding list provide the film’s fairly copious and entirely gratuitous nudity – you just aren’t trying.

It is certainly nice to see a film that isn’t ripping off a much better movie, grinding itself down to get a PG-13 rating, and Ben (Green) is a good deal less irritating than most of the heroes in the genre and Feldman’s MaryBeth does decently as the final girl – which isn’t much of a spoiler, since when you see the other contenders, you’ll be able to hear their life-clocks ticking down. However, you do still get the sense, even with the more fully-drawn characters, that Green is not so much interested in their lives as their deaths. To a certain extent, one can hardly blame him, since those are full-on, gore-drenched efforts that are certainly a throwback to a less kinder, less gentler era. The pace does lag somewhat in the middle, before picking up again, and its failure to give you any reason to care about the fate of anyone concerned, means that it can’t be considered as anything more than a bit of entertaining fluff. Howeer, as a bit of entertaining fluff, it’s perfectly acceptable.