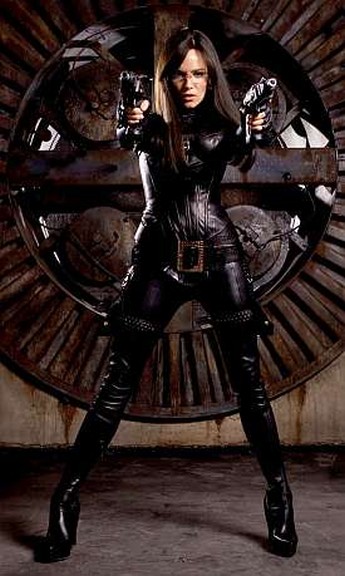 If I was twelve, I’d probably think this was the greatest film in the history of history. As I sit in my mid-40’s, it clearly isn’t that, yet I can still appreciate its noisy excess. In many ways, this is what the Bond movies used to be like, before the recent reboot: crammed with gadgets, firefights and globetrotting action. Now, no-one will mistake Tatum for Sean Connery, or even Roger Moore [George Lazenby, perhaps…]; however, I’ve a lot more time for Sommers than the other purveyor of mindless action, Michael Bay, and have had since the tenticular delights of Deep Rising. Duke (Tatum) and Ripcord (Wayans) are tasked to deliver a new nanobot-powered weapon of mass destruction from its manufacturer to NATO. En route they are attacked by a team led by Duke’s former fiancee, Ana (Miller). The assault is repelled with the help of the GI Joe team, a trans-national security force formed from the elite of the elite. Our pair join the team, but the WMDs get taken from the GI Joe base. Turns out the manufacturer, James McCullen (Ecclestone), has taken them back, and has his own plans for their use.

While not without significant issues in the plot – at one point, the villains blow up the polar ice-cap and it sinks [hello? Icebergs?] – it seems churlish to complain about factual accuracy or implausibility, given the background. It’s based on a frickin’ toy, people. Sommers knows how to film coherently, and unlike Transformers, there is enough variety in the action to keep things interesting. The bad guys do have more personality than the good ones, and the various love stories are implausible and/or boring – I’d certainly have thought so at age 12. However, especially in a marvellous chase through “Paris” [actually, an East European facsimile thereof], it delivers a torrent of hyperkinetic, caffeine-fuelled action, which is exactly what we wanted to see. While no-one will ever mistake this for great cinema, it’s not dull, and if you’re in the mood for something where you can leave your brain in neutral for two hours, this fits the bill admirably.