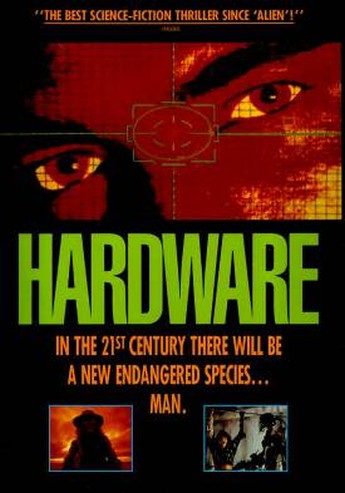 [6] As a distillation of 80’s genre cinema, this film is near perfect. Aliens, Terminator, Hellraiser, Predator, Max Headroom and Blade Runner are all ruthlessly milked of their best parts, not to mention Paris, Texas and every woman-alone-with-a-psycho film to date. If the monster thus created isn’t up to the sum of these parts, Hardware is, to use the cliche, a roller-coaster ride, albeit one we’ve been on before.

Plot is slim (android goes berserk) and there’s a disconcerting change of focus in the middle when attention switches from hero to heroine but you don’t notice the flaws at the time – the imagery (75% pop video, 25% Nescafe advert), a detailed futureworld, good effects, cool soundtrack and more flashy camerawork than I’ve seen in ages help execute the cinematic equivalent of the three-card trick. There’ll no doubt be the usual predictable whining from certain predictable quarters, yet it surpasses it’s budgetary and location limits, setting up (and discarding, unfortunately) some lovely ideas on the way – Motorhead’s Lemmy as a taxi driver???