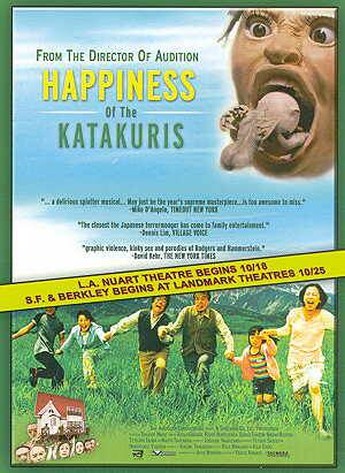 Most famous for his horror works, Miike turns his hand to lighter fare here – complete with lushly staged musical numbers, albeit ones that include, say, dancing zombies. It plays a little like Fawlty Towers, with a family-run guesthouse thrown into turmoil because their customers tend to die and their corpses have to be disposed of. Though, as Chris pointed out, its closest cousin may be Little Shop of Horrors, with which it shares characters who react to the most bizarre of events by bursting into song. One example: the daughter is romanced by a con-man in naval uniform, pretending to be Queen Elizabeth II’s unacknowledged Japanese nephew.

Then there’s the claymation opening where a woman’s uvula (the dangly thing at the back of your throat – never say these reviews aren’t educational) is pulled out and floats away. Oh, and did I mention the erupting volcano? If large chunks of this make no real “sense” – does any musical? – it’s hard to complain when you simply have no idea what’s going to happen next. Not sure it all works, especially playing to a Western audience (if ever a film needed liner notes, this is it); you get the feeling this may be the unfiltered product of late-night, sake-fuelled, brainstorming script meetings. But enough deadpan black humour comes across to provide a highly satisfactory time, and prove that cinema can still come up with stuff you’ve never seen before.