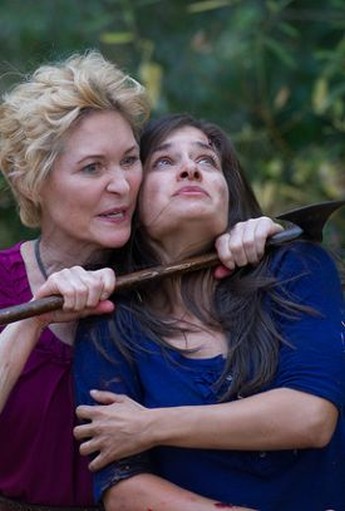 There would be many who would be disappointed to watch this, and discover it was not Hansel and Gretel: Witch Hunters, but The Asylum mockbuster version. We would not be among them. What you get here is a fairly straightforward and non-revisionist retelling of the Grimm story (which is also the surname of the siblings in this case), albeit in modern times. Lilith (Wallace) runs the Gingerbread House, a popular destination for everyone – the local cops appear particularly to like her savory snacks… Working in the store is Gretel (Greco), whose brother Hansel (Lydic) has a difficult time when their father announces his intention to remarry. He runs off into the woods, and when Gretel follows, she finds him with his leg caught in a bear-trap. Taking him to the conveniently-nearby cabin, she finds it’s Lilith’s house: the siblings accept the offer of a place to stay overnight, but when Lilith wakes, she’s told Hansel was already taken to the hospital. Needless to say, that’s not quite the case.

Probably wisely, Ferrante accepts that everyone knows the story, so doesn’t exactly make much effort to hide Lilith’s dubious actions. I can’t say there’s a great deal of internal logic here: how many people a week would have to disappear, in order to stock an entire bakery of meat pies? But, again, this is a fairy-tale, and it seems pointless to expect common sense. The most entertaining thing is watching Wallace, who can go from “friendly grandmother” to “loopy psycho” with the blink of an eye, and there is also some impressively psychedelic nightmare sequences. Against that, Gretel is uninteresting and nondescript, Gretel the kind of irritating teenager who deserves a slap, and their father should likely have been eliminated from proceedings entirely. Overall, however, providing you are not actually expecting Witch Hunters, and are satisfied with a moderately-gory update of the classic horror story to pass 90 minutes, this will do well enough.