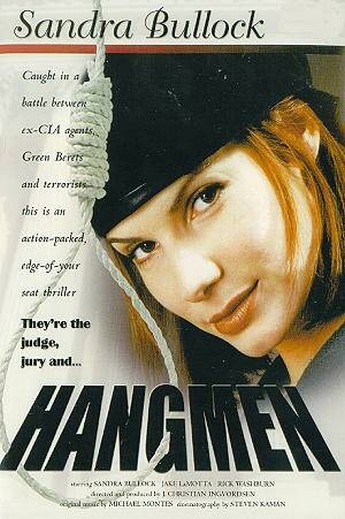 Being sold largely on Sandra Bullock content, fans of hers will likely be disappointed as her role is a supporting one – it was her feature debut, after all. Though actually, even those of us who think her career has been in a downward spiral since Demolition Man will be disappointed, because this film navigates its way tirelessly to a dead end, then meanders around in circles. It starts promisingly, with a government agent who has discovered the existence of a secret assassination squad. He contacts his son Danny to warn him there may be trouble – bad move, as the villains decide to take Danny out. Why, precisely, is never clearly explained, I can see why they might capture him, to lure in his dad, but murder seems pointless.

Anyway: aided only by his father’s former army buddies, he goes on the run, until they kidnap his girlfriend (that’ll be Sandra, then…) and use her to capture him – maybe they read my previous sentence about why killing him made no sense. It all ends in an extremely lengthy, badly-staged, repetitive action sequence – one of those where you doze off for ten minutes, but it’s still going on when you wake up. About the only point of note is the presence of the real Raging Bull, Jake LaMotta, as a minor character. It’s no surprise that hardly anyone involved, bar Sandra, went on to bigger things.