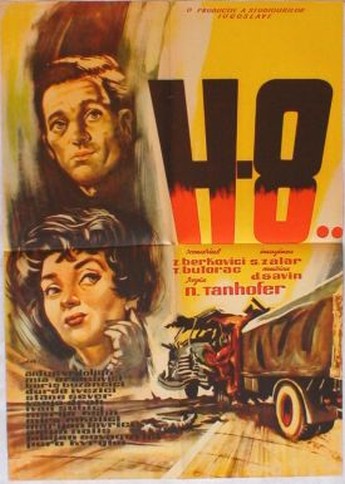 A bus and a truck going in opposite directions on the highway between Zagreb and Belgrade collide with each other, thanks to a car which speeds off, known only by the partial number-plate “H-8…” That’s how this starts: we then rewind a few hours, to the start of the journeys for both vehicles. We then follow the passengers and drivers as they head toward their known fate. Well, somewhat known fate. The narration reveals up front the number of deaths, and even details like the seats in the bus which they occupy. However, there’s still tension in the movie, coming from the fact that it’s not certain who will be sitting in those seats at the time of the accident, as relationships form, ebb and flow. It’s an interesting grab-bag of characters: a soldier going to see his newborn son; a doctor escaping a court-case; a man newly released from prison; a concert pianist just out of a relationship.

For a film over 50 years old, it has held up pretty well, and avoids the usual tropes of Eastern Bloc cinema of the time, such as over-earnestness or much social commentary. Of course, society has moved on: most obviously in the way smoking is almost compulsory on the bus [amusingly, the only time someone is prohibited appears to be when they are outside at a rest-stop!], but there’s also a certain sexism that’s firmly a product of the era. There aren’t actually too many likeable characters – the truck-driver’s kid is about the most genuine – but over the course of the 105 minutes, you do grow accustomed to them, even if this reinforced my personal idea that hell is a long-distance coach journey. There’s an oddly-artificial feel to the shots of the bus on the road [is it a model?] that actually works for the film, though the ending remains abrupt, with the stories brought to a sudden end – in some cases, permanently. However, you will still remember it, and you probably haven’t seen another film quite like this.