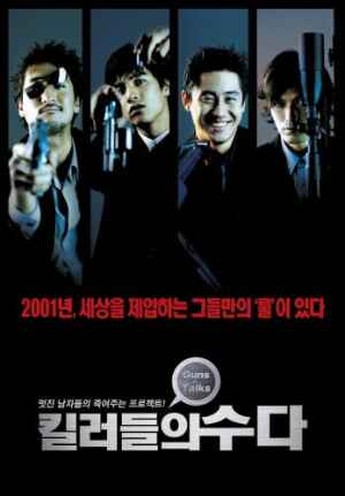 Even professional killers have a home life. So seems to be the message of this Korean film, centred around four hitmen who share a house, and have to deal with prosaic things like cooking, as well as executing stylish, well-planned assassinations. However, things are coming apart: one member refuses to kill a pregnant woman, another is falling in love with a schoolgirl who keeps pressing them to murder her English teacher, their leader (Shin) just accepted a job from a TV anchorwoman they all idolise, and a police inspector (Jeong) is hot on their tail, leaving a cryptic warning on their computer screen-saver. Which would be fine, if only any of them understood English.

The title is almost entirely accurate, albeit with more mouth than action. After the opening mission, there’s a good hour before the next body hits the floor, and it’s so beautifully shot (in both senses!) that you wish they’d included more – it’s likely better than the finale of Godfather III. However, the characters and their lives are great fun to watch, with sarcastic lines such as, “Did some fish die in spicy water?” when one killer’s culinary non-talents are exposed. There is a lot of sly wit on show, meaning that the two-hours plus zip past very easily. The ending is rather easy to criticise, failing to satisfy, but I’d have hated to lose any of the characters on either side of the law.