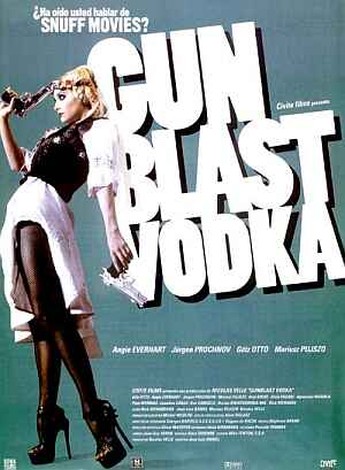 The middling mark this one gets isn’t really an accurate recommendation; you’ll likely either love or hate it. Probably hate, actually, but its sensibilities were just that damn skewed, we found adequate entertainment simply trying to decide whether to take it seriously or not. The plot – American consul’s ex-wife is kidnapped for a snuff movie – suggests we should, but it’s largely played for laughs, and the execution is often so lurid, you expect it to turn into a Duran Duran video. In many ways, it’s the usual “mismatched duo”, with sex-crazed detective Marek Brzeczyszczykiewicz (Pujszo – his character’s surname is not me falling asleep on the keyboard) and former Mossad agent Abel Rothstein (Otto). The inevitable grudging respect eventually develops, after the traditional friction, falling-out and male bonding.

The characters on view, however, are just strange. Prochnow’s snuff director is almost the most normal one on view: Otto looks like Dolph Lundgren’s brother, while Pujszo appears to be on day-release from a home for mad scientists. Yet despite its sleazy subject and berserk approach, it’s remarkably coy; anyone expecting actual nudity will be disappointed. Oh, and did I mention it’s set in Poland? Very set: an early caption informs us that New York is 3707 miles from Wroclaw, as if we should know where the latter was. If you find this bizarrely amusing, you might just get a kick out of the movie. Then seek professional help.