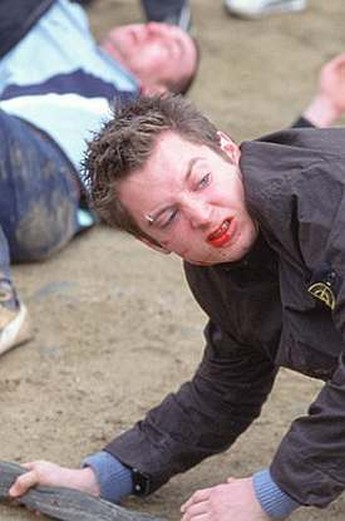 I do have to say, Wood seems horribly miscast as Harvard journalism student Matt Buckner, who gets expelled after covering for his room-mate’s coke-stash, and travels across to London to see his sister. Well, that side of things is okay; it’s more him falling in and becoming friends with her brother-in-law Pete (Hunnam), who runs the West Ham United “firm” of hooligans. Even in the middle of a life-threatening brawl, Wood just seems too gentle an individual, one who would fold like cheap sheets rather than engage in violence.

Apart from that (admittedly, somewhat central) mis-step, this gets just about everything else right, I suspect largely due to the input of Dougie Brimson as one of the writers. His real-life experience in the field likely informs the movie’s ability to put over the seductive, tribal appeal of the football firm, the sense of belonging and family that it can provide to its members – and, yet, nor does the film soft-pedal the impact that the violence can have on those who participate in it.

The plotline develops around the bitter rivalry between West Ham and Millwall gangs and their charismatic leaders: a few years ago, an encounter turned deadly, leading to the retirement of then West Ham boss, the Major. However, that incident has not been forgotten, and when the two teams are drawn against each other in the FA Cup, the uneasy ceasefire between the two teams – mostly because they haven’t faced each other – is skating on very thin ice. Things in East London are not helped by Buckner’s chosen career, since previous experience have left the Green Street gang very wary of journalists, and he has chosen to keep it under wraps.

But when a journal he’s been keeping, out of habit more than anything, gets discovered, it throws another spoke into the firm’s wheel. It’s an impressive piece of work, though credit must also got to writer/director and former kickboxing champion Alexander (seems her brother was also a bit of a hooligan when she was growing up in Germany). It’s difficult to make a film which is basically about violence, without sliding into polemic one way or another, either glorification or condemnation, but this does a remarkably good job of striking the balance. Now, about the casting…