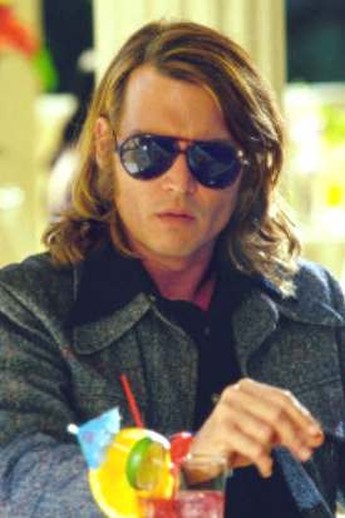 This plays like a Caucasian version of Scarface, though one sense it’s not likely to achieve quite the same cult following among those who aspire to the lifestyle. It depicts the rise and fall of George Jung (Depp), from humble beginnings as a beach-bum pedalling dope on a California beach, into the king-pin of cocaine, and then down into a lonely inmate, betrayed by his partner (Mollà), spurned by his wife (Cruz), and abandoned by the only thing he ever truly cared about, his daughter. Yeah, probably not quite up there with “Say hello to my little friend!” and the film also doesn’t bother much to address the wider issue of the impact all the imported drugs have had on those who buy them – though the sight of a coke-crazed Cruz is certainly disturbing. Otherwise, we’re supposed to feel sorry for poor little George because his daughter doesn’t come see him in prison. Oh, the poor dear… It’s particularly ironic, given director Demme’s early death of heart failure a couple of years later, with cocaine in his system. And one has to wonder about the actress playing George’s mother, being six years younger than Depp.

For the most part, this is an enjoyable enough romp through a more innocent time, where a drug dealer could find a wholesale supplier, by going to Mexico and asking everyone, “Donde esta la pot?” It’s a somewhat spotty narrative: one second, Jung is shipping drugs from California to his home in New England, the next he’s been arrested with 600 lbs of marijuana in Chicago. How did that happen? It would seem a fairly important point in Jung’s career, where the legal ramifications of his business first came home to roost, but it’s glossed over rapidly. The more I think about the film, the more holes I can pick in it like this: however, it’s to the film’s credit that all these negative thoughts didn’t cross my mind till about 24 hours after watching it. Depp is his usual charming and roguish self; it’s only when you see the real Jung in the final shot of the film that you realize any similarity is purely coincidental. With all these flaws, I’m beginning to wonder if perhaps I was high when I watched it, as the grade above has been downgraded at least twice in the course of these paragraphs.