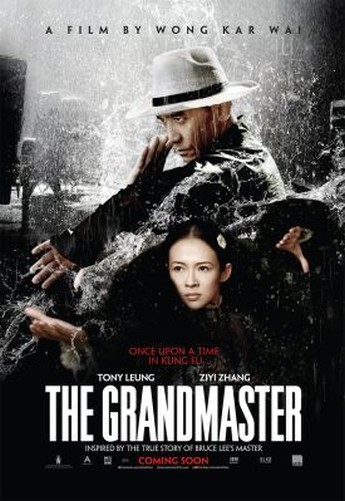 I’ve never been a fan of Wong’s, finding his head jammed far too far up his own cinematography to be entertaining. Was kinda surprised to see him making what appeared, from the trailer, to be a kick-ass action flick – but, hey, Ang Lee gave us Crouching Tiger, so figured I should give it a chance. Instead, I was reminded of why I’ve been previously unimpressed: put bluntly, I preferred this movie, the first time I saw it, when it was called Ip Man. Both are based on the early life of the same historical character, who would go on to teach Bruce Lee martial arts. However, in comparison to Ip, this is over-stretched and burdened with additional plots and characters that meander around for far too long, plodding through the depths of their own angst: I can see why the Weinstein’s removed 22 minutes from the Hong Kong release (viewed here), for the American market.

This version also diverts severely from the story of Ip, to Gong Er (Zhang), the daughter of a martial-arts master whom he bests in a philosophical duel early on. She has a lust for vengeance on the man who kills her father, but is torn because his dying wish was forbidding her to take revenge. Their relationship reminded me of the one between Chow Yun-Fat and Michelle Yeoh in Tiger – all friendly professionalism on the surface – except without one-tenth of the emotional heart – and the resolution is largely unsatisfying. What saves the film from being a complete waste of time, are some luscious martial-arts sequences, proving that Yuen Wo-Ping still absolutely is the best action choreographer in the world: if you can watch them without awe, or a desire to learn the way of the fist, you’ve a colder heart than I. If the Weinsteins had removed everything else except the action scenes, this would certainly be worth seeing: in the 130-minute version, however, it’s closer to a plodding chore.