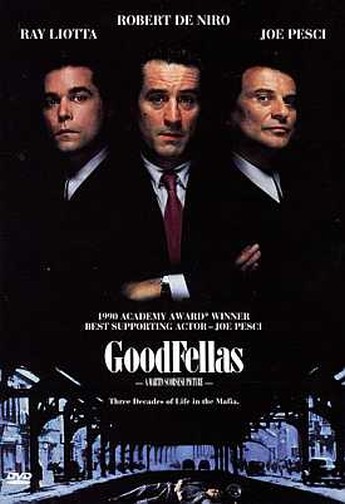 It’s somewhat ironic that Henry Hill, the real-life informant who was the inspiration for this, now has his own MySpace page, having been expelled from the witness protection program. Clearly, Mafia vengeance is not quite what it used to be. I have to confess to being slightly disappointed in this: while still good, and often very good, it falls somewhat short of expectations for something in the top 20 on the IMDB. Maybe it’s because I’m too familiar with the mob pigeons, the “Goodfeathers”, from Animaniacs? However, I think the problem is mostly Liotta, who seems somewhat ill at ease as Hill, the Irish-American who, “Always wanted to be a gangster.” The film follows him as he gets his wish, only to find out that the reality is not quite what he dreamed it would be. Murder, drugs and crime become his way of life, until the net closes and he ends up turning informant.

The heavy, heavy use of narration is something of an issue too; I tend to feel that if you need frequent voice-overs to explain things, you’re not doing your job as a film-maker. Yet against it, are moments of genius such as the lengthy tracking shot which accompanies Hill and his new girlfriend (Bracco) into the back entrance of a club, through the kitchens and on. Or Pesci’s brilliant performance as Tommy, a man for whom psychopathic – and portrayed with grim, if enthusiastic, realism by Scorsese – violence is never more than a wrong glance away. It reminded me a lot of Casino, though to me, that latter work was more assured, not least in its use of popular music as a commentary; here, the high-point is at the end, where Sid Vicious snarls out My Way. It’s an appropriately twisted acknowledgement of the gap between Hill’s dreams and the thuggish depths of gangster life.