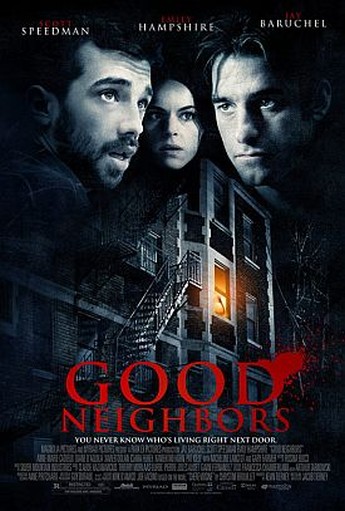 Three people are among the occupants of an apartment building in Montreal. Louise (Hampshire) works in a Chinese restaurant and is devoted to her two cats; Spencer (Speedman) has been confined to a wheelchair since the car accident which killed his wife; Victor (Baruchel) is a neurotic teacher who has just moved in, and has his eye on Louise. There’s also a serial-killer stalking the area, raping and killing women; Louise and Spencer are fascinated by the coverage. As the winter progresses, one of the other inhabitants demonstrates a strong aversion to Louise’s cats, and this results in a chain of events, demonstrating that none of the three are quite as innocent as they seem.

Man, it takes its own sweet time to get going. You’re well into the second half of proceedings before anything approaching an interesting story-line begins to develop, and the characters aren’t the kind of people with whom you’d want to spent much time. When the film stops, literally, pussy-footing around, it’s actually relatively engrossing, as it becomes clear this three-sided triangle is not going to end well. There’s one scene in particular, which is excruciating to watch, depicting a murder in a way which has a nasty sense of realism to it, though there’s also a massive plot-hole which I can’t really describe, for reasons of spoilerage, but it’s pretty obvious in terms of the way things end. I’ll just say “ice-cubes” and move on. You’ll know what I mean when you see it. The aim seems to be something Hitchcockian, yet there are too many mis-steps on the way: that, and the poor pacing, stop this from being more than a one-watch wonder.