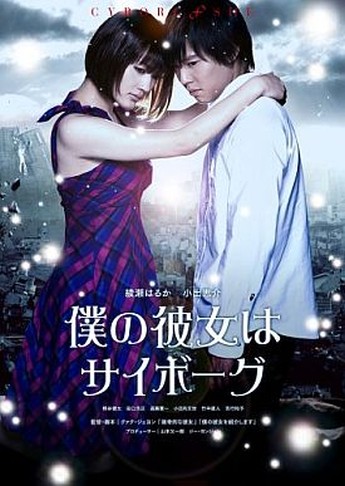 If Terminator 3 was actually a love-story. That’s a good way to think about this, which has the lonely Jiro (Koide) surprised by an unexpected encounter with a pretty girl (Ayase) on his birthday, which he usually spends by himself, to the extent that he has to buy his own present. After the meeting, he spends the rest of his life working on a cyborg version, and at the end of his life, he sends it back it time to meet himself, one year later, and change the direction of his future – for instance, by protecting him from a lunatic who will attack the restaurant where he’ll be eating that night. She also uses her cyborg powers to prevent other disasters, even if she refuses to tell Jiro anything about his future. But what are the prospects for a long-term relationship between a man and an artificial person? Can she learn to love, that most innately human of all traits?

At two hours, it’s probably a good 30 minutes too long, with the middle section in particular over-extended – the whole concept of her being a “superhero” and preventing disasters is basically unnecessary. Meanwhile the (likely also over-lengthy) sequence where she and Jiro visit his long-destroyed hometown, suggest she can travel through time at will, and bring through others with her, which poses a whole new set of questions, never answered. However, there’s still a lot to enjoy, since the bits which work in this, works absolutely beautifully – not least a final coda which ties up all the loose ends into a wonderful bow, suitable for presentation. There’s also a genuinely disturbing sequence depicting what could happen if a severe earthquake hits Tokyo, and the destruction which would result. The two leads both give engaging performances, and the overall result is a charming mix of romance, comedy and science-fiction which handwaves its way past the whole temporal anomaly thing with aplomb.