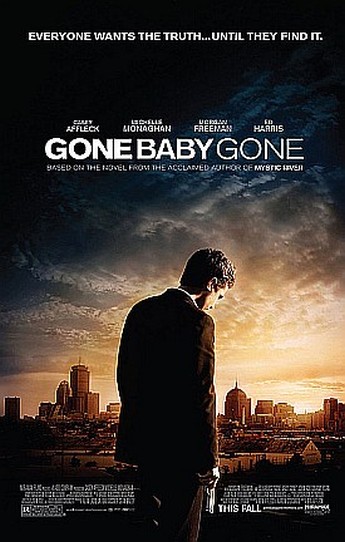 The moral dilemma at the heart of this is clear-cult: which is better, to do the right thing for the wrong reasons, or the wrong thing for the right reason? It’s not a question which is easily answered, and it’s rare to see a film which leaves you wondering, in such a compelling manner, whether you would make the same decision as the hero. Private-eye Patrick Kenzie (Affleck) and his partner (Monaghan) are brought in by the relatives of an abducted child, snatched from her coke-slut mother (Ryan). Initially, while the cops, Remy Bressant (Harris) struggle to get into the close-knit Boston community, it looks cut and dried, especially when Kenzie finds out the mother stole $130K from a local drug-lord. However, despite this, something doesn’t sit right with Kenzie and he keeps picking away at the scab of the case, even when everyone else considers it closed.

From the same source as Mystic River, Affleck has done a good job of capturing the sour gloom of inner-city Boston, and gets some great performances out of the cast, Ryan in particular, for a debut director [well, unless you count his 1993 student short, I Killed My Lesbian Wife, Hung Her on a Meat Hook, and Now I Have a Three-Picture Deal at Disney. No, really. That’s what it was called.] The pacing is weird, however, with what feels like a climax in the middle, and while enthralling up until that point, it never really recovered for me, from the sense things had ended, even as the script is only getting going. It doesn’t help that this pseudo-climax is, deliberately, extremely confused as to what has actually happened. Things never quite recover, though the final revelations still pack more wallop than is usual for this kind of thriller.