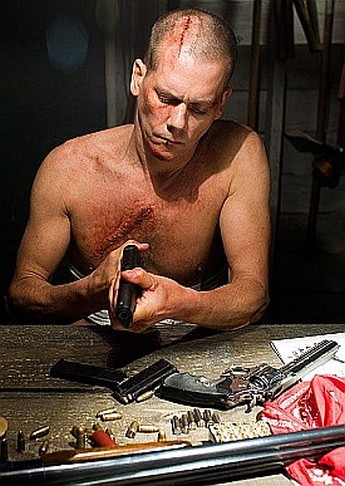 The main problem here is that the director wants to have his cake – in the form of thrilling action and serious violence – and eat it to, by simultaneously telling us that revenge solves nothing, simply generating an escalating cycle of brutality and making an already bad situation much worse. Wan is far from the first film-maker to find that the two are almost mutually exclusive, even when, as here, you shoehorn a Sarah McLachlan song into proceedings, to indicate the Lead Character’s Emotional Pain [capitals apparently per the script]. Nick Hume (Bacon) is driving home from a hockey game when his son is killed at a gas-station, as part of an initiation. When told the guy will get five years at most, Hume tracks down the punk responsible and stabs him – only for his victim’s brother, Billy Darley (Hedlund) to respond in kind, upping the ante.

It’s clear that Wan is far happier with the running and shooting aspects, than the drama, and the film shifts uneasily between the two flavours of cinema. The only person who really seems comfortable is John Goodman, playing the local mob kingpin and gun-dealer, with foul-mouthed gusto that matches the grindhouse tone perfectly. Bacon has a more difficult time, required to sweep from Dad of the Year to Travis Bickle inside about ninety minutes, and it’s tough to take the audience with him. Still Wan has a nice feel for the action, most notably showcased in an extended camera-shot through, out, up and down a parking garage, that would make Brian De Palma weep with envy. If Wan had abandoned the pretenses at balance, and gone for a balls-out vigilante flick [the novel this was based on did come from the writer of Death Wish, after all], then this could have been a certifiable guilty pleasure. I just don’t want my revenge with a side order of angst, thank you very much.