All you die hard Godzilla fans can kiss my ass I swear. Making such a big deal about the changes they made to the original Godzilla. Well, here you go, I am bent over, my pants are down: go ahead, KISS MY ASS! I loved the new Godzilla. He was so cute, so expressive, so freakin’ huge! His eyes were great. Ten of us went to the theatre tonight to see the big guy. We set up bar at the east end of the row.. Assembly line style, we were cranking out Absolut and Orange Juices like nobody’s business. Watching this movie and inciting not only my row, but several of the surrounding rows to chant along with us each time Godzilla entered the picture in all his destructive glory “Gojira…Gojira…”: softly at first, then bursting into a full chant as the movie got more and more exciting.

OK. Now, about the movie. I am, as most of the friends I have left can attest, pretty observant, and one of my favorite pastimes (when I am not playing “spot the psycho”) is listening to other people’s conversations when they are least aware of my monitoring. I noticed a bit of disgruntling regarding the texture of the film in the beginning. I like the feel of the film because there is a period flavor to it that cannot be accomplished with the high technology we have. It is very forties in its approach to giving us the insight that is necessary to understanding why Godzilla exists. And of course, the characters we all know and love along with all the characters we love to hate… 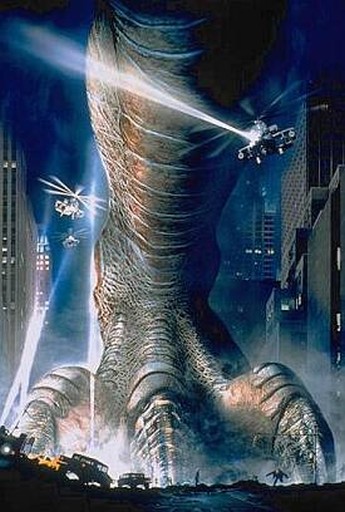 Personally, I completely hated Matthew Broderick’s girlfriend. It’s not even worth it to remember her name (which escapes me at the moment anyway). Her character had no depth at all. I felt like she didn’t belong there, almost like her uncle must’ve saved Roland Emmerich’s life at some point and he said, “I will do anything for you”, so the uncle told him to put his niece in the film. Cute and perky, but she irritated me with her stupidity. No one can live in New York for 8 years and survive with Jello for brains like that – or hair for that matter. The rest of the cast were perfect. Hank Azaria as the ‘Animal’ cameraman (did you know he does the voices for three of the Simpsons characters? And I loved him as the gay housekeeper in The Bird Cage). Broderick was a great nerdy-yet-brave scientist. Reno was outstanding as the French guy who belonged to…an agency of which we are never quite sure of why they are involved or what their real motives are. But he is always so rugged and cool, you don’t really care whether or not he is a good or bad guy! Michael Learned as the asshole mayor could have been left out altogether, but I suppose it was a necessary evil.

The star of the whole shebang…of course…Godzilla. How can I say it without spoiling it? There are many facets to this Godzilla. Lots of them… Believe me when I tell you that the destruction of New York was never more fun, especially when the military did most of the destructing. I do not have a foot fetish, ok?? But I loved the big guys’ feet. They were awesome – his impact tremors moved more than just a puddle of water, whole cars were jumping in the street when he walked nearby.

I had a lot of fun watching this film. I also got pretty toasted, but that doesn’t mean that I didn’t really enjoy it. Of course you will find the usual plethora of unbelievable stuff, so I am giving it an “Oh, I am so sure” factor of 8 on the 1-to-12 scale. But all in all, the story, the characters (except for you-know-who) and the star were great. It was fun but not gory: I suppose that was also necessary to achieve their ‘target audience’. I like my share of the icky and morbid, but I forgive them this little faux-pas only ’cause I had a very enjoyable time, watching and chanting: “Gojira, Gojira, GOJIRA GOJIRA!!“

The last thing I want to say is that I am only a little upset about the ending…but it’s ok. I am still thrilled to death about Godzilla’s new look: he is severely cool looking and I know for a fact Toho said that if they had had the technology back in the 50’s to do this, Godzilla would have looked exactly like this. And I tend to agree: his movements were really, really huge, very, very fluid, and he was incredibly graceful in the sea.

Jim’s view: if this had been titled, oh, Attack of the Reptile or something like that, it’d have been a solid popcorn movie. But by putting the Big G’s name on it, you create a set of expectations, nay, demands. #1 of these is that the film will be mostly about destruction on a city-wide scale. Unfortunately, for the middle hour or so, the (undeniably impressive) large monster vanishes, and we get lots of little lizards instead. This feels more like Jurassic Park than anything else, and was disappointing, since the aforementioned D on a C-W S was great.

The character development was also flawed…in that there was some. There was never any doubt who the star of the Toho movies was, and it wasn’t anyone under 30 foot high. I agree totally with Chris’s comments about Maria Pitillo as the kooky reporter/girlfriend; any moments when she was in peril, I was cheering on the peril. This was all probably an inevitable part of the Hollywood-ization of Godzilla, but is still kinda sad.

On the other hand, I did like the new design, sleek and fast, though the purported ability to run at 200 mph never seemed to materialise. Curiously, his top speed always seemed to match the mode of transportation the heroes were using, so be they on foot or in a taxi, he could never quite catch up… But hey, this is a film about a freakin’ radiation-mutated giant lizard, so drop such a logical attitude and you’ll find this is no disaster movie.