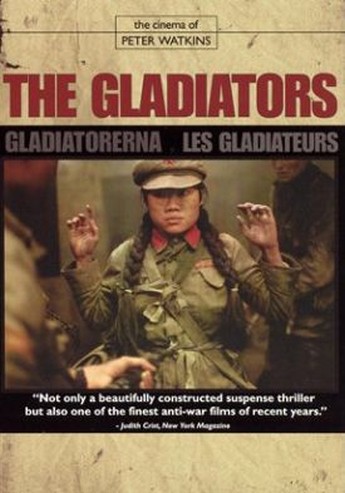 At some indeterminate point in the near future, war has been abolished. To settle differences, factions send a small team of soldiers to a neutral location, where they battle it out, in lieu of a larger-scale, and more destructive, conflict. In this case, the location for the 256th such battle is Sweden, and it pits a coalition of NATO forces, mostly British, American and German, against the Chinese. The contest is a race through a landscape peppered with obstacles and traps to reach the control room, though points are also awarded or deducted for capturing opponents, death, etc. Meanwhile, the process is watched from the outside by a collection of high-ranking officers from all nations, and it’s also being broadcast on television to the watching world beyond the complex. However, there’s a couple of wrenches in the gears. Firstly, in the shape of a disaffected French player, who is intent on bringing down “the system,” from the inside, and secondly, when two soldiers from opposing teams realize they aren’t the real enemy.

The above really sounds a great deal more interesting than it actually is. Watkins is best known for infamous anti-nuclear docudrama, The War Game, depicting the lead-up to, and aftermath of, nuclear armageddon on the United Kingdom, and there’s a nod to that here, with the contest being called “the peace games”. He brings much the same sensibility to this production, shooting events as if it were some kind of reality show, including interviews with the participants and so on. This is certainly well ahead of its time technically – the film was made, with Swedish funding, in 1969, yet has the feel of any modern reality show. But this is countered by politics which are stuck in the sixties. The film is badly hampered by an extremely preachy tone, which is never less than extremely subtle, with few of the characters getting beyond shallow stereotypes, though the film appears to come to the admirably bleak conclusion that all political systems suck. However, the result resembles being cornered by an aggressive pol.sci. major for an hour and a half in the student union bar, and is about as entertaining.