Today is the 5th of May. Cinco de Mayo celebrations are in full force here in Phoenix. Cinco de Mayo is the Mexican equivalent of St. Patrick’s Day with the exception that these celebrations include firing guns in the air all night. Today is also special because we experienced an unusual planetary alignment. In what NASA scientists have called a “rare” planetary alignment, Mercury, Venus, Mars, Jupiter and Saturn joined in the configuration that started Wednesday and led some to expect cataclysmic events including floods, earthquakes and tidal waves. So we reacted to these events in the usual way. We went to the movies. 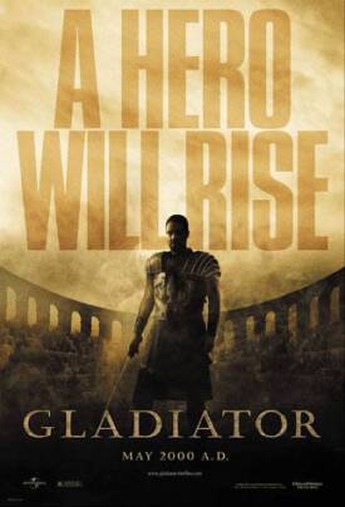 A hero will rise…

It’s generally known that Ridley Scott doesn’t take his filmmaking lightly. Let me go a bit further and say that Ridley Scott disembowels you with the intensity of his craft. I just looked at my hands and I’ve bitten my nails down to the quick – I hate it when I do that. This film grabs you from the very first scene, as we are witness to a spectacle of a battle (a little too Blair Witch-y for my taste – Jim can attest to my aversion to camerawork of this type. Just give me a bucket). Other than the occasional blotchy camera-footwork, this is a fascinating look at an event which occurred during the Roman Empire. Although not historically accurate and, from what I gather, deliberately inaccurate, we are swept away in stunning cinematography, lavish sets, the extensive use of CGI that melds almost seamlessly with the real (except for the tigers – I heard they were too hungry) and the dramatic intensity of the story, written by David H. Franzoni and John Logan, with perhaps half a dozen or so screenplays between them. [The ones that stand out either for being memorable or awful are Bats, Amistad and RKO 281.]

We are introduced to Maximus (Crowe), a general and confidante of a Roman emperor (played by a near-dead Richard Harris), who’s life is completely turned around in a web of jealousy and treachery (beautifully done by Phoenix). We watch as he tries to regain his life and exact revenge on those who caused him to go from a respected general to a slave to a gladiator in the Arena games. The fight scenes are spectacular and gory – definitely not for the squeamish. I know that more than a few will love the Amazon Women archers in the Coliseum games (right, Jim?). The drama as seen through Crowe’s eyes is touching and has given me a better respect for this actor. Kudos to Derek Jacobi and the now very dead Reed, the latter playing his last role magnificently (I almost didn’t recognize him).

I have heard this film likened to Braveheart, Spartacus and Ben Hur. And definitely not to be viewed on mere videotape. This must be seen on a big screen. No two ways about it. Although if I really wanted to be in the middle of a war, I could probably just go outside the theatre to the nearest Macayo’s Mexican Grill’s Cinco de Mayo celebrations, but I think I prefer the splendour of Ridley Scott’s newest foray in history-fiction. Don’t miss it.