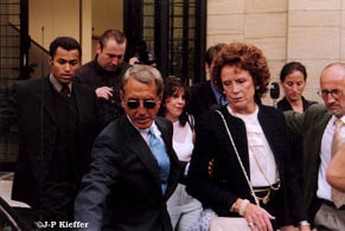 The world of passport applications might seem unlikely ground for a thriller, but that’s the theme here. The setting is Paris (if there’s nothing recognisable about it, that’ll be because it was filmed in Luxembourg), where security expert Peter Connelly (Currie) is doing a makeover at the US Embassy. He meets a beautiful Soviet employee, but – luckily for the plot – doesn’t hear the alarms bells this will trigger in any film-goer of average intellect. For beautiful Soviet women inevitably have nasty relatives-boyfriends-owners lurking nearby. And, yes, before you can say “RUN AWAY!!!!”, Peter’s embroiled in shady double-dealing involving Russian low-lives and his employers in the Embassy.

There isn’t much in the way of surprises or shocks here, but the cast are pretty good, and seem to be giving it their all. Weller and Schneider have a wonderful world-weary look, while Currie handles the torn loyalties cliche decently enough. The weakness is largely in the direction, never rising beyond pedestrian, and a script which seems to believe that the audience is still impressed by the basic concept of moving pictures. You’ll likely have worked out the whole thing with half an hour to spare, and will probably be able to find better uses for that time.