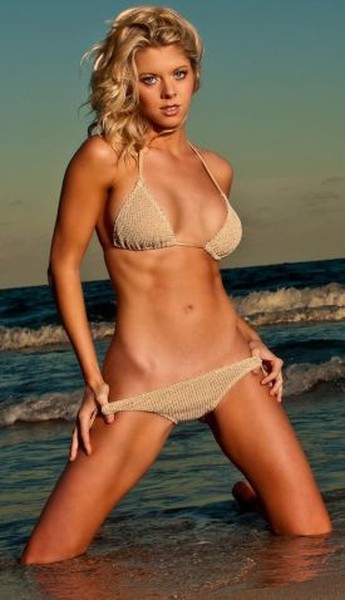 This poses the question: when a movie is so self-consciously shit, and just doesn’t care, can that be counted against it? Or when a film paints a thinly-disguised caricature of Girls Gone Wild with a thoroughly repellent creator – but then also spends vast amounts of its running time dedicated to replicating the T&A of that entity – is this barbed satire or rank hypocrisy? Indeed, the film is stuffed to the brim with thoroughly unlikeable characters, and you’ve likely got trouble when the best actor in it is WWE commentator, Jerry Lawler, playing the local sheriff. But I admit: I laughed out loud on occasion, not least at Lawler’s method of dispatching one villain. If I had to bet, I get the sense this is a smart movie playing dumb: but doing that so well, it could easily be the real thing. However, it could almost as easily be genuinely stupid, and lucking in to a few good moments.

It focuses on Rebecca Foster (Peterson), a “good teen” with a straight-laced Christian mother, who escapes for an all-girl weekend in the Florida keys with her friends. It’s not long before there’s underage drinking, gratuitous nudity and, naturally, a psycho killer wielding a medieval weapon are all coming into play. The aforementioned GGW parody are down the coast in Daytona beach, with Ron Jeremy and a couple of Howard Stern regulars guesting at their event, and the killer doesn’t spare them either. Throw in Linnea Quigley as a fake Aussie(?) barmaid, and the drummer from Iron Maiden doing karaoke too, and you’ve got something which works very nicely as a comedic spoof of the slasher genre. The problem is, the makers don’t stick to that: the extended efforts to skewer GGW are much less successful, because it is painfully obvious, the film is hardly less leering or exploitative of its actresses – who were clearly cast for “abilities” other than acting, if you know what I mean and I think you do.

So I’m not quite sure how to grade this, because I’m hard pushed to remember the last movie which swung so violently between nailing the bulls-eye, and being almost unwatchable. The makers have some talent: that’s clear from one sequence, when the killer storms the house in a relentless assault, which is both well-constructed and surprisingly creepy. But the makers need to realize that less is often more, particularly when it comes to satire, where they end up sado-masochisting a deceased equine. They don’t (yet?) have the chops to pull off the sudden shifts in tone that they try to accomplish here, swinging wildly between parody, horror and soft-porn, though to be fair, very few film-makers would be able to cover those three bases. Worth a look for the moments where it all comes together to work perfectly, yet be aware you’ll have to mine a lot of coal to find those diamonds.