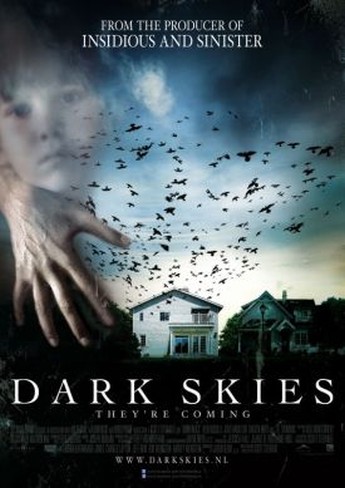 The Barrett family – husband and wife Daniel (Hamilton) and Lacy (Russell), and their two young sons – have their issues, most notably that Daniel is unemployed and struggling to make ends meet. However, things are about to get a great deal worse, as their house is increasingly plagued by strange occurrences. Someone or something empties the fridge one night: animals are initially blamed, but are they also responsible for the subsequent stacking of all their canned goods into an elaborate configuration? Or all the family photographs being removed from their frames? Their children begin to behave weirdly, and three separate flocks of birds simultaneously fly into the house. Eventually, Lacy suffers a missing time experience, losing six hours, and when she starts researching, finds reports from other places, which suggest an alien abduction of someone in the family is approaching.

There are typically two aspects to this kind of film: the build-up of menacing events, and the pay-off as things eventually come to a head. This entry doesn’t quite work on either level. While some of the individual events have an undeniable degree of “creep,” there isn’t any detectable logic, even in an alien way: why would they cause avian mass-suicide, for example? It just feels like the makers came up with every semi-spooky idea they could, and lobbed them into the plot. And when the extra-terrestrial shit eventually hits the household fan, there isn’t a great deal more sense to it. As in Signs, these creatures initially seem all-powerful, except when it becomes necessary to the plot that they aren’t, when you can make a good stab at fending them off by boarding up the windows. In the words of Fox Mulder, “I want to believe” these kinds of movies, but they still need to rely a bit more on logic, rather than just spookiness.