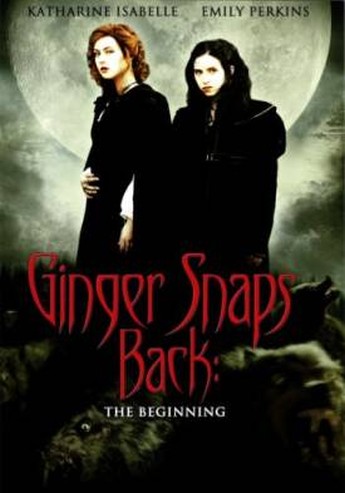 The law of diminishing returns takes its inexorable toll, despite one of the best titles for a movie in a long time. [When they come out with a box-set, will they call it A Packet of Ginger Snaps?] Here, they move the setting back to the early Canadian frontier, where Ginger and her sister Brigitte are lost in the woods. Ginger is injured, but an Indian leads them to a fort…only for them to discover they might have been safer up a tree. When the inevitable happens – Ginger getting bit – you’re on for more or less a repeat of the original, in period costume, as she starts to turn wolfy, and Brigitte seeks a cure with increasing desperation.

After a good opening act, this falls apart in a number of ways. They introduce (and make a fuss over) the idea that killing a wolf cures the bitee; from the first film, we know this isn’t so. We’re several steps ahead of the characters for most of the movie; even though the actresses are playing different roles, I found it hard to shake the feeling they should know this stuff already. The relationship is exactly the same as in the other entries – it was shot back to back with part two – they even say “Together forever”. While that’s nice in a way, it does smack of a lack of imagination: what’s next, Ginger Snaps in Space? It’s clear the budget was larger: the fort alone can’t have been cheap, and the FX are definitely better than before (again, credit KNB). However, one make-up effect is very disappointing – let’s just say you’ll know it when you see it – and there’s just not enough bite to be found in this installment.