The film ran into post-Columbine trouble in Canada, and a lot of casting directors refused to touch it. That’s their loss, for despite copious gore (albeit diluted by occasionally rubbery FX), exploitation this certainly isn’t. Having previously done episodes of both Xena and La Femme Nikita, Fawcett is clearly not into the usual female characters. And while program claims to be the first “menstrual werewolf” movie may not be true (Hello? Company of Wolves?) this is still a bloody good movie – much like the title, that can be read two ways. 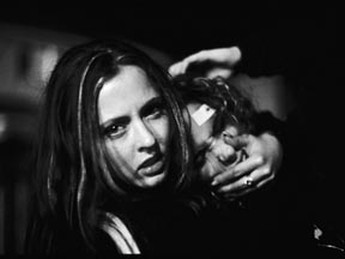 Brigitte and Ginger are Goth-geek sisters, obsessed with their own deaths, up until Ginger a) gets her period, and b) is attacked and infected by the local werewolf. The changes brought on by these two events are blurred – for example, both cause hair to sprout – and neither exactly helps with the everyday traumas of high-school life. Hard to say which causes more trouble, really. Part Teen Wolf, part Heathers, this does lose its way in the last reel, when it becomes another dimly-lit-running-and-screaming film. However, it doesn’t cop out, and the first two-thirds possess a delightfully morbid sensibility; the actresses put over a true sisterly bond, with Perkins especially good as Brigitte. As anyone who saw American Werewolf in Paris knows, decent werewolf movies are few and far between; this one is the first entry for the new millennium.