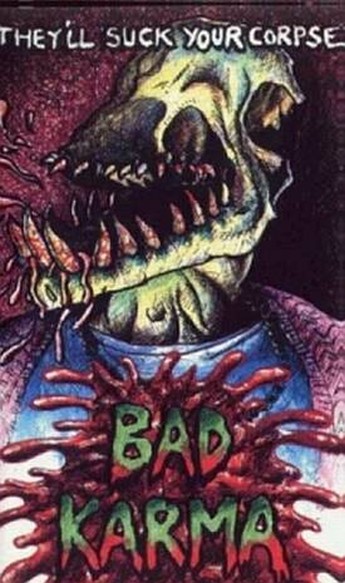 Coming in on a wave of reviews are a pair of films from London-based Shapeshifter Productions. And hey, they’re actually pretty good. Bad Karma scores with a gleefully energetic and imaginative approach cramming in warped idea after warped idea into an end product that’s part Personal Services, part Evil Dead 2, but is mostly unique (trans-dimensional creatures disguised as crazed Hare Krishnas?). While not all the ideas quite work, bonus points are due for having the gall to try, and the film is certainly miles away from the usual cliches.

The story in Drillbit starts off just as imaginatively – an AIDS cure turns people into zombies – but it peters out and becomes a show-case for violence and splatter (spot the TC contributor as a crazed killer!), though as it’s an extended show-reel rather than a finished movie, this is to be expected. Technically, both films are certainly as good as many pro-productions I’ve seen, thanks in no small part to some impressive effects. Amateur psychologists may care to ponder the way that Alex’s mother ends up dying killed horribly in both films…