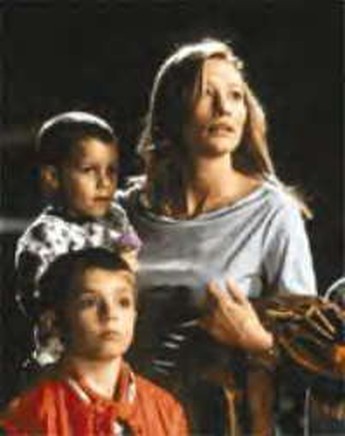 It’s been a long time since Sam Raimi did a horror film, but this just about qualifies, even if it’s more psychological than visceral. Unfortunately, the result is disappointing, relying too much on cheap scares that don’t work and a plot we’ve seen too often before. Medium Cate Blanchett is asked to help find a missing girl, only to discover her powers bring her unwelcome attention. Who is the culprit? Redneck Reeves? Retard Ribisi? [Though neither would seem obvious choices for their roles, they’re both convincing] Or slimy school principal Kinnear?

The spooky twist right at the end is effective, but the film could have done with that level of commitment and imagination all the way through. Blanchett comes across well, pitching her performance nicely between self-doubt and strength, and Raimi delivers an adequate level of direction which produces a nicely Southern Gothic feel. However, there’s little here that will surprise, and I’d lay the severe lack of “edge” to the whole thing, at the door of script-writer Billy-Bob Thornton. The heroine was supposedly based on his mother: all I can say is, he didn’t inherit her talents. You don’t have to be a psychic to see what’s going to happen here.