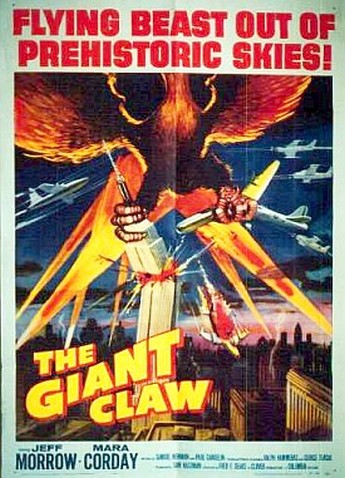 For the first twenty minutes, we were chortling like a drain at this, and that was even before we saw the titular monster, supposedly from another galaxy, which projects an anti-matter screen that makes it impervious to normal weapons. Up until then we simply had the worst use of narration in any movie ever, ludicrously-inept use of stock footage badly mixed with models of completely different planes, and dialogue riper than month-old gruyere. And then the creature shows up: original plans for a stop-motion monster were axed due to budgetary restrictions, and the makers went with a Mexican puppet instead. Something got lost in translation, since “trans-galactic monster of immense size and terrifying form,” apparently was taken to mean “a peeved ancestor of Gonzo from The Muppet Show, flapping off barely-concealed strings.” An understandable mistake, I have to say. [While there are plenty of pics to be found online, trust us, the impact will be all the greater if you don’t Google Image it first. Let’s just say, the poster (right) is not entirely accurate…]

The problem is, that isn’t enough from which to hang the film, and all the entertainment value more or less ends at this point. The bird swoops about the world, panicking the population, and occasionally nibbling on planes, trains and automobiles, while the hero (Morrow), his entirely-unconvincing mathematician love interest (Corday) and the US military try to find a way to stop it. You will likely not be surprised to hear that the solution requires the same kind of incomprehensible pseudo-science, which was used to explain the monster’s presence in the first place. However, proceedings unroll in such a turgid way, that even the appearances of the creature wear thin. B-movie lore relates that, on hearing his hometown crowd’s reaction to the monster, Morrow snuck out of a screening early, for fear of being recognized. It is somewhat comforting to realise that, even fifty years ago, audiences were thoroughly unimpressed.