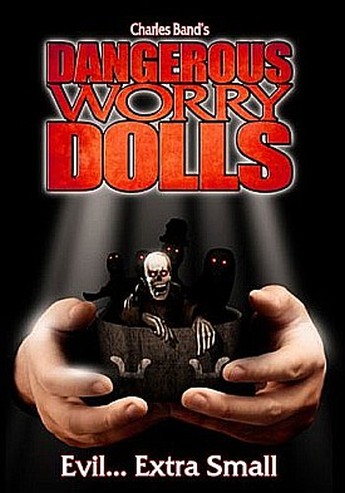 Trust Band to shoehorn his favorite genre, the killer dolls, into another B-movie classic, the women-in-prison film. It’s an uneasy combination, yet one that kinda works; it’s certainly something you won’t have seen before. Eva (Morris) is in prison, but just wants to do her time and get out. Not so fast: the sadistic female governor has it in for ‘trailer trash’ like her, another inmate demands Eva help smuggle in contraband; and one of the guards has a sideline operation involving the production and online sale of pornography. In other words, pretty much business as usual for the B-movie penal system. The wrinkle here is that Eva’s daughter gives her a set of worry dolls, trinkets designed to deal with her troubles while she sleeps [it’s apparently Central American]. Except that they crawl into Eva’s ear and possess her, turning her into a bad-ass, with no fear or scruples.

It’s certainly different, though we were repeatedly distracted by the way this apparently-huge facility has a prison population of about seven, and a staff of no more than three – including the governor. I was also thinking the core concept was going to involve the dolls exacting revenge, as in other Band pics, rather than the heroine having one pop out of her forehead sporadically, something which made her surreally close to a human cuckoo-clock. Not a concept that really evokes much terror – except every hour, on the hour. There are some other odd moments, which I can’t go into, since a significant part of the entertainment value here comes from such “WtF?” revelations, that could only happen in this kind of B-movie lunacy. If on that level, it has its moments, I can’t claim this did much more than passed the time in a harmless fashion.