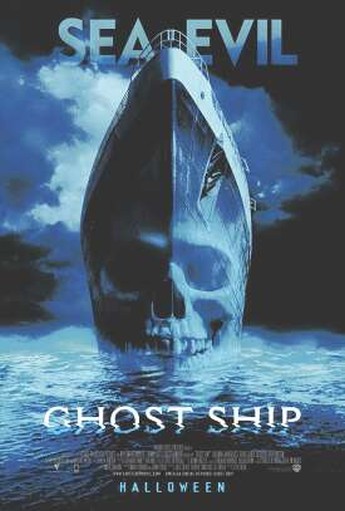 You and I both know that deserted liners adrift in the middle of the ocean are a Bad Thing, to be avoided at all costs. Unsurprisingly, these characters, led by Captain Murphy (Byrne) and Epps (Margulies), do no such thing, boarding said boat with salvage in mind. And they find gold. Hooray! But, inevitably, there’s also a presence which sinks their ship and is intent on not letting them live. Their only hope is a young ghost (Browning), whom only Epps can see, and in typically spectral fashion, takes her damn time to say what’s going on.

The opening scene is great; you’ll look nervously for days at any steel cable lying around your house. Unfortunately, while the scenes in the boat’s past have a stately horror to them, the stuff in the present can’t compete, being full of such stale cliches you can’t believe they have the gall to roll them out. When one guy pulls out a photo of his fiancee and gazes at it lovingly, you know his survival time is minutes. There are also several plot holes which divert attention from the atmosphere the film wants to generate. How did a deserted ship get from Labrador (Atlantic) to the Bering Straits (Pacific)? What about the vast quantity of gear the crew have, when their boat was destroyed just before they left the liner for good? Then there’s the final, obligatory “you didn’t think it was all over” shot, that opens a whole new can of worms. See the first five minutes, then do something else: it’s all downhill from there.