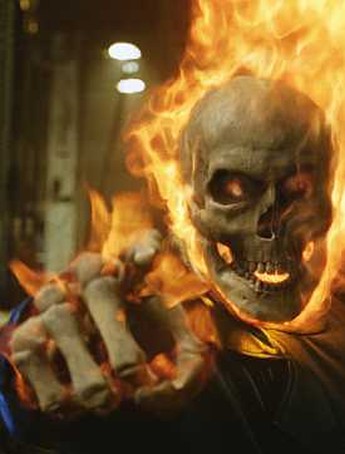 After The Wicker Man, it was nice to see Cage in a film appropriate to his talents. Thie is a ludicrous, excessive, nonsensical production, about stunt-cyclist Johnny Blaze, who sells his soul to the devil; and when Mephistopheles (Fonda) invokes his rights, replaces our hero’s head with a skull. Oh, and said skull is on fire. This nicely matches the fire which trails behind his motorcycle, as he tries to stop Blackheart (Bentley) from taking over the world and save his girlfriend (Mendes). Like I said: this is daft as a brush – and is exactly the kind of bollocks, without any pretension at intelligence, that Hollywood is very, very good at. See also The Chronicles of Riddick and Ultraviolet. Not that many of you did. 🙁

Anyone going into a movie about a motor-cyclist with a flaming skull for a head, looking for depth or subtlety, probably needs their heads examined. And, I’m pleased to report, such elements are entirely absent here. Now, I have no familiarity with the comics, so can’t say how accurate a translation this is; but then, I also couldn’t give a damn. The secondary characters are generally an irritating bunch, particularly Mendes, whose character does not change an iota, while Blaze ages from Matt Long (26) to Nicholas Cage (43). Fonda seems to be having fun though, and though played entirely straight (the only way possible), one senses those involved were entirely aware of the lunacy inherent in the central premise. While not a life-changing disaster, if I were never to see this again, it delivers exactly what you’d expect when you look at the image on the right.