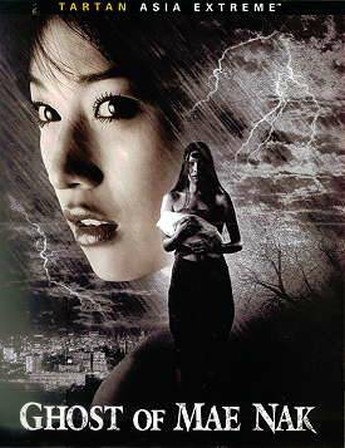 Nak and Mak are to be wed, and have just got themselves the perfect little love-nest. Sure, Tak keeps having nightmares about a woman with holes in her head, but surely that can’t be of any significance. Of course, this being a horror movie, it is extremely significant, and they find out that their new location has a history. The story, in Reader’s Digest Condensed Version, runs like this. A soldier returns from war to his wife, Mae Nak, and child. They live idyllically together – until the local villagers tell him she actually died in childbirth while he was away. It becomes increasingly clear that Mae Nak’s spirit is not at peace: but how can she be appeased?

Wronged ghost seeks revenge and/or release. The basic subject matter is familiar to us here in TC Towers, having seen three other movies on that very theme last month. And the legend on which this is based was already the subject of about twenty Thai films, including one of the biggest of all time, Nang Nak. However, to most Western eyes this will still seem fresh; Duffield makes Bangkok look like a living, breathing, working city, and the story also diverges from what we’ve seen before, particularly in the final chapters. Plus, a totally splendid death, by plate glass, ranks alongside those from The Omen and Final Destination 2 in cinematic history. That’s always a plus. 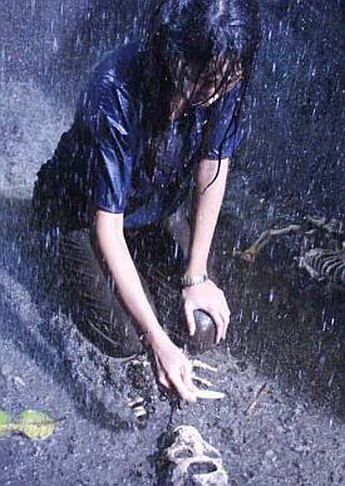 Early on, there’s an over-reliance on cheap scares, like the inevitable “bathroom mirror” cliche. However, the further this goes, the more it delves into local culture and beliefs, and the better it gets, as the film explores new, interesting territory, adding spin to well-used concepts, like the visit to a medium. Tiptoeing around spoilerdom, let’s just say that the ghost might be as much Nak’s protector as her enemy – in general, the more repellent the character, the worse their fate. At least, until the end, where the spirit’s motives becomes clear; this takes what looks initially like a weak finale, and cranks it up to memorable. Overall, a solid and satisfying creation, which brings something new to the “haunting” genre.

[See also our interview with the director on Trash City]