Ritchie hit a rough patch after Snatch – I suspect, not coincidentally, when he was hanging out with that American bird, whatshername. This reached its low-point with Revolver, which I called a “wretched and confused excuse for a con-game flick.” While the Sherlock Holmes films were at least watchable, they weren’t much more. I didn’t bother with King Arthur, The Man from UNCLE or, god help me, his live-action version of Aladdin. This, however, represents something of a return to form. It’s no Lock, Stock. However, it is a solid and entertaining piece of work, anchored by a remarkable performance from – and I can barely believe I’m writing this – Hugh Grant. Yes, Mr Wimpy RomCom is almost unrecognizable here, and all the better for it. 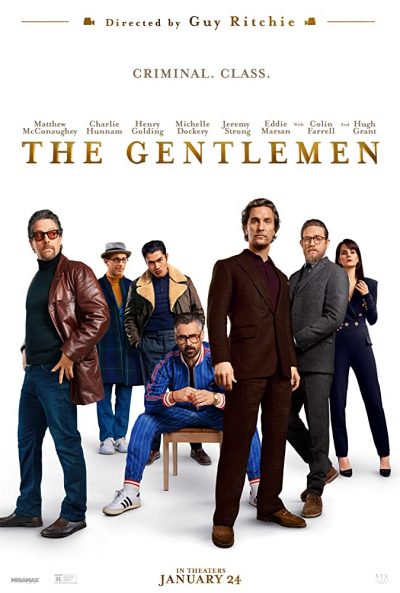 He plays Fletcher, a tabloid journalist who turns up in the house of Raymond Smith (Hunnam), lieutenant to one of Britain’s biggest marijuana dealers, American Mickey Pearson (McConaughey). Fletcher has been digging up dirt on Pearson for his employer, but offers to sell the potentially empire-wrecking dossier to Smith for twenty million pounds instead. However, there’s a lot more going on, not least Pearson’s plan to get out of the business and sell it to another Yank, Matthew Berger (Strong). This project is coming under pressure from Chinese rivals, and matters are further complicated by Pearson and Smith helping track down a missing aristocrat’s daughter, who is holed up in a drug house on a South London estate.

Yep, no shortage of moving parts, and it’s impressive how Ritchie is able to keep them all working together, into a cohesive and never confusing whole. The individual characters here are mostly memorable and fun to be around. Particular credit goes first to Grant, who manages to make his journalist both creepy – he’s the epitome of a muck-raker – and curiously endearing. The other one who stands out is Colin Farrell as Coach, an Irish boxing instructor of sharp wit and tongue. When either of these are in full flight, that’s when this comes closest to delivering the Ritchie content which we know and love. Although, the tone here is probably a bit darker than his classic works: there’s still humour, it’s just lying further beneath the surface.

Indeed, for the two duelling drug-barons, it’s hardly there at all. I have to wonder whether their Yankee presence was some kind of contractual obligation, as they seem to be roles begging for some British character actors. It almost feels as if neither McConaughey nor Strong have seen a Guy Ritchie gangster movie before, and instead wandered in from another, considerably more serious entity. Neither are bad performances; they just seem out of sync with the rest of the cast. Their apparent reluctance to use the word “cunt” – a word as beloved by Guy Ritchie, as “nigger” is by Quentin Tarantino – may be symbolic of a deeper underlying problem. Yet it hardly derails proceedings, which remain a fun frolic until the last brutal drop.