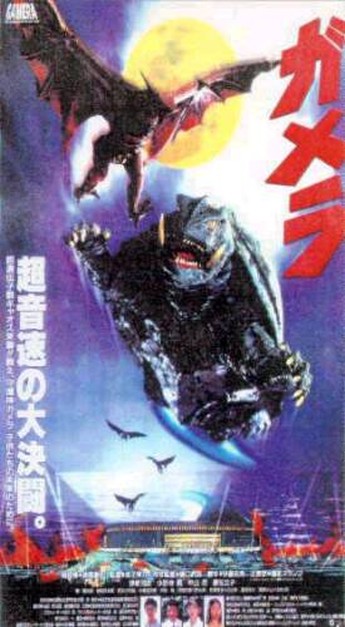 “Rated PG for mild violence”. How we howled when we saw that because, of course, there’s nothing mild about the violence here. It is a frickin’ Japanese monster movie, after all: violence will be widespread and wholesale. Buildings will be pulverised; trains used as toothpicks; unfortunately-located oil refineries explode. The entire point of these is carnage on at least a citywide, if not larger, scale. Every time a particularly meaty piece of destruction ensued, Chris and I would turn to each other and say, as one, “Mild violence!”. Gamera remains, however, nothing but a Godzilla knockoff, and this film is no different. After fifteen years layoff for Gamera, this re-invents the monster from scratch, and deserves some credit for being the first kaiju eiga, in 1995, to use CGI to enhance the rubber-suited mayhem.

That aspect is executed pretty well, even when toppling into the ridiculous, such as when Gamera suddenly spouts rocket jets and takes off like a giant flying saucer, as he chases down the Gyaos, giant reptilian birds from Atlantis who are the latest threat to mankind – or, at least, Tokyo. The problem is the utterly bland, colourless humans. Even the little girl (Fujitani – Steven Seagal’s daughter) with a psychic link to Gamera is a pointless sideline, adding nothing of significance to the film, and that’s also true for the obligatory social commentary, which is handled in a clumsy and uninteresting fashion. When the creatures aren’t around, you’ll want to fast-forward, for this is nothing more than monster porn – a lot of thrashing around with absolutely no emotional involvement.