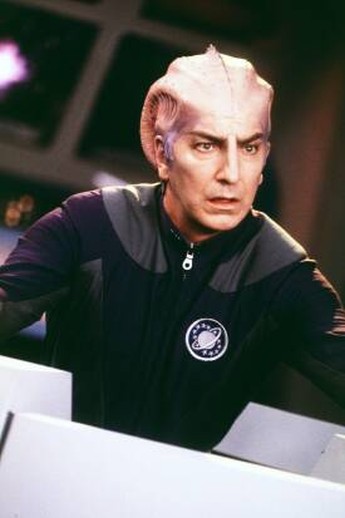 What starts out as a nice parody of the Star Trek universe, and the rest of the “lumpy forehead” genre, eventually peters out into a lame imitation, becoming the very same crap SF that it aims to satirise. This is a shame, since there’s certainly plenty of scope for a send-up of these shows, and the obsessive fandom which surrounds them. But the film is far too kind, with only Rickman (right), playing an embittered Shakespearean actor, showing the necessary venom.

He and the rest of the TV cast are mistaken for real heroes by a gullible race of aliens, and abducted to fight their enemies, which is where it descends into sub-pulp heroics – it doesn’t help that Allen’s captain is an irritating twit, a less-endearing version of Buzz Lightyear. There are admittedly some nice lines, such as Weaver’s comment about ducts, but these are more thrown-away than understated, and hence largely wasted. You could really say much the same for the entire concept.