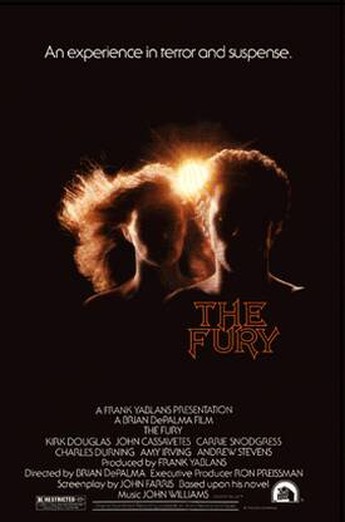 Two years after Carrie, De Palma would go straight back to a psychic schoolgirl again for his next film, albeit with rather less success. Amy Irving – another Carrie veteran – plays the victim here, as Gillian, who finds herself drawn in to a dubious government research project led by the even-more questionable Childress (Cassavetes), whose intentions are never made clear. But former agent Peter Sandza (Douglas) also wants her, to find out what happened to his son, another psychic kid who has been kidnapped by the same people.

The results are disappointing, with many scenes that don’t add anything to the film – such as when Sandza is mugged. It also takes too long for the two threads to meet up, and the fates of the main characters seemed false and contrived to me. You may also find that the sight of a 62-year old Douglas leaping from rooftops provokes sniggers of derision rather than anything else. Against this, Irving is excellent as the girl caught up in things beyond her comprehension (also look out for Darryl Hannah as one of her classmates!), and some individual scenes are great, such as Sandza’s “home invasion”. However, the main thing I took away from the film is that if you must take an unstable psychic out for the evening, visiting a fairground probably counts as asking for trouble…