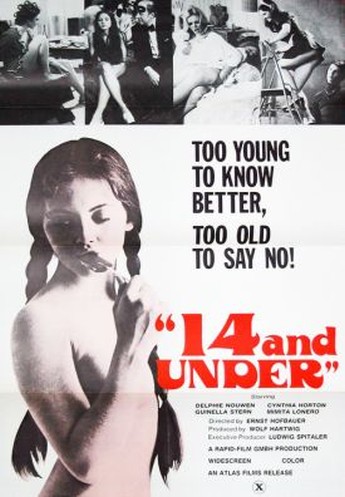 Truly a product from a different era, there is absolutely no way a softcore film entitled 14 and Under would conceivably even be made these days, never mind receive actual distribution in the US. It’s a cousin to the other docudrama “report” films which were churned out in the bucketload during the seventies, by enterprising European producers, and isn’t really my normal fare – in part, because this feels like its mere viewing would merit a custodial sentence. But one of my pastimes is helping out with fansubs, and this was the next project. It’s an anthology, overseen and narrated by the supposed “chief of the youth welfare office”. He provides the kind of commentary about today’s children which hits the spot in traditional road-show fashion, managing to be both moralistic (albeit from the liberal angle of sex being natural) and exploitative: it simultaneously tut-tuts about how things are, while depicting them with lurid glee.

Fortunately – and I was highly relieved by this – all the actresses getting their kit off are far, far older than their supposed ages. For instance, Jeannine, supposedly playing a 13-year-old milkmaid, is probably 20 or so. This significantly reduces the sleaze factor, in what would otherwise feel like Jimmy Saville’s home videos [yeah: fuck you, Saville and your set of lawyers that tried to suppress us from posting about your paedophilia]. But there are a couple of scenes which still stray dangerously close: one with a pair of kids spying on their parents having sex, and the other has a mother basically pimping her daughter out, in order to keep her sadistic boyfriend. The latter sequence, in particular, is creepy, and one can see why it was removed entirely from the American release. Yet others are almost completely jokey, such as the one where a young couple try to bribe a younger sibling into leaving them alone, complete with Benny Hill-style, speeded-up dressing and undressing. Oh, hold my aching sides, for I fear they may split.

So, to be honest, it largely fails as a comedy, and the adjustment of morality over the past forty years has relieved it of almost all erotic potential too. What is left is little more than a bumpy ride combining unease with the wholesale fashion disasters which were the decade, taking place amid an apparent Great Razorblade Famine of 1973 [really, if you’re playing a 13-year-old, you should probably not be sporting a pubic region which resembles the Black Forest, both in density and area of coverage…]. But just to be safe, all trace of it has been excised from my hard-disk.