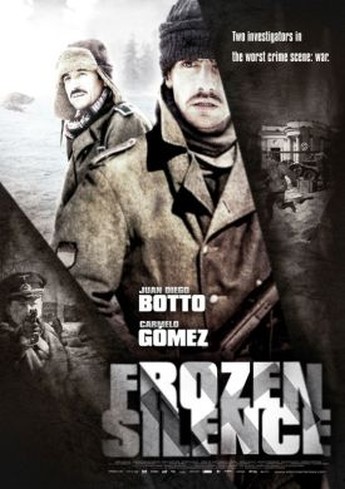 It’s always nice when a film opens the door on a bit of history of which you were previously unaware. Here, the presence of a battalion of Spanish volunteers fighting alongside the Nazis on the Russian front. Who knew? Anyway, while being pushed back by Soviet forces, they find the body of one of their number, with his throat slit and a religious text carved into his chest. Fearing this could be the work of pro-Soviet collaborators, the commanding officer orders Private Arturo Andrade (Botto) to take on the case, he having been a policeman before signing up as a soldier. His investigation uncovers a good deal more than he expected: everything from freemasonry through religion to illicit and entirely lethal gambling sessions among the soldiers, though the case may also have ties back in the mother country, based on mail sent to and from the victims. Yep, victims – because more bodies are turning up, similarly defaced with lines from a prayer.

It’s certainly an unusual location for a murder mystery, with Andrade and his sergeant (Gomez) having to dodge artillery shells every time they drive anywhere to investigate [to the extent that it ends up looking more like a Python sketch], and deal with both enemies as well as their allies fron Germany. I liked Botto, but the story loses focus as it goes on, and there are just too many diversions. I don’t mind those relating to the actual crime – the roulette sequence is particularly well-done (just remember where they are…) – it’s things like Andrade’s relationship to a local girl which really don’t serve much purpose, and other scenes appear almost inexplicable. With a better hand on the script, this could have been a truly original twist on the genre: instead, it doesn’t manage to live up to the promise, and disintegrates into a bit of a mess by the end. Much like the Eastern front, I suppose.