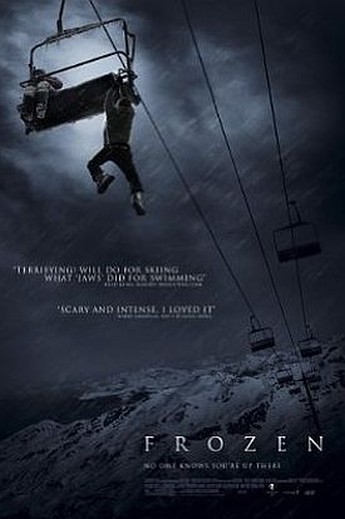 Three pals – old friends Dan (Zegers) and Joe (Ashmore), along with the former’s girlfriend Parker (Bell) – are out to enjoy some winter sports, though Joe resents Parker’s presence on their “guys’ time,” as her inexperience means they have to stick to the nursery slopes. At the very end of the day, the trio plead their way onto the chair-lift for one final run. But a mix-up in the control booth leads to the lift being turned off, and they are stuck, high above the ground, with the temperatures dropping. Worse yet, it’s not just a question of waiting until morning – since it is Sunday night, the complex won’t re-open again until next weekend. Not only do they have to figure out a way to get back to ground level, that is just the beginning of the perils that threaten them.

One suspects the reports of people ‘fainting’ at the screenings are not much more than good publicity. There’s not much here to generate more than a slight frisson, though given the limited characters and setting, it does a better than expected job of keeping the tension going. Admittedly, it does rely on a threat which appears only when required by the plot – I haven’t seen such dramatic timing in the animal kingdom since Jurassic Park 2. The film does take too long to get to where it needs to be, and the petty bickering among the trio up to that point isn’t exactly enthralling. However, once the lift clanks to a sudden stop, it is effective enough, and will likely leave you contemplating where about hypothermia, as well the other fates against which this brushes, should rank on the list of horrible ways to die.