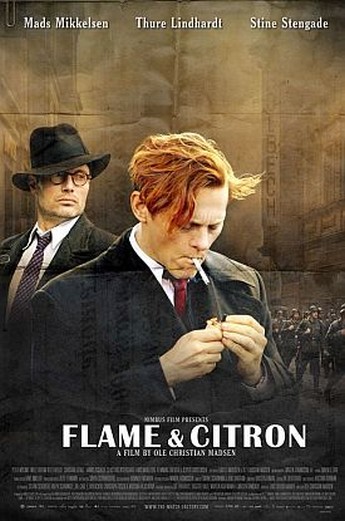 This did provoke an interesting discussion as to what we’d do if the USA was ever taken over. Chris reckoned she’d become part of the resistance, while I preferred… Well, the word “collaborator” is so inflammatory, isn’t it? Let’s just say, I’d be a bit more passive. The two men here take the active approach, fearlessly gunning down Nazi sympathizers in broad daylight in occupied Denmark, as part of the resistance. Bent (Lindhardt), known as Flame for his shock of red hair is the gunman; Jorgen (Mikkelsen), a.k.a. Citron, is his nervous, perpetually-sweating colleague who acts as getaway driver. It’s a career with a short life-expectancy: the Nazis, under local commander Hoffman (Berkel), spare no effort to track them down. There appears to be a mole inside their organization and pair also have to deal with the demands of their handler, who claims to be following instructions from British intelligence, with regard to who they should kill. However, a conversation between Flame and one of the targets casts doubt on this, and he is also falling for courier Ketty (Stengade), though her loyalties remain uncertain.

Except in spurts, this didn’t quite manage to hold my interest. It does raise moral questions, about what actions are permissible in defence of your homeland – but it doesn’t make much effort to answer them, being more interested in the day-to-day running of operations. While it is effective at generating the appropriate level of paranoia a lifestyle like this would generate, it doesn’t do enough with it, and there’s no significant character arc for either of the leads. Flame and Citron did exist, and largely acted as described, but sticking to the historical facts damages the film, especially at the end, which comes out of nowhere and doesn’t feel satisfying. Against that, Lindhardt and Mikkelsen deliver good performances, as men struggling to deal with complex moral issues – who is a legitimate target? – who are also living on a knife-edge of mistrust, uncertain whether that knock on the door is friend or foe. Hopefully, the decisions they have to make, are ones we never face.