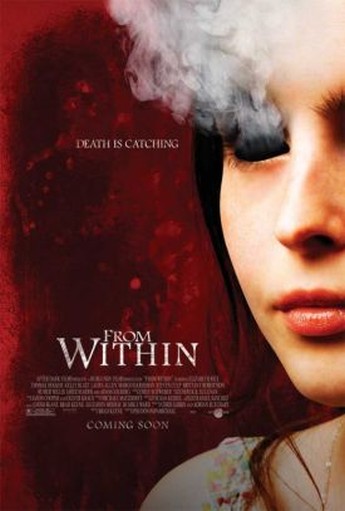 Grovetown is a small, rural town where the inhabitants almost all possess strongly Christian tendencies, to the point that non-believers in the one true faith are actively targeted for harassment. When one such teenager commits suicide, it’s not seen as a bad thing – until it appears to be the trigger for a sequence of similar deaths, which appear to be infectious in nature. The dead boy’s brother Aidan (Dekker) is befriended by Lindsay (Rice), which causes some conflict, since the local pastor’s son (Blatz) regards her as his eminent domain. As the deaths continue, Aidan and Lindsay realize that it’s actually a curse, brought on in a final act of defiance by the first victim, designed to repay Grovetown and its inhabitants for their intolerance. As the town descends into a state of fear and finger-pointing, can the teenagers figure out a way to stop the curse from its apparently implacable progress – which now appears to be heading back in their direction?

There’s a cynicism here about religion of all kinds that I quite appreciate. Christianity and its lack of respect for other religions is an obvious target, but the alternative isn’t exactly shown as thoughtful or tolerant, with the local community’s suspicions not unfounded. It is more than a tad stereotypical, and I was particularly unimpressed with the explanation of the trigger for the tit-for-tat deaths. However, when it avoids trying to be preachy, and sticks to its main theme, a cautionary tale of unintended consequences, it works nicely, with Rice and Dekker giving a couple of well-anchored performances which hold everything together. The film is definitely a slow-burner, relying more on atmosphere than explicit death, and takes a while before the pieces start to fit together – the best sequence is likely the very end of the movie. Still, I’d probably rather have a film that gets better over the course of its running-time, than one which starts out strong and fades away as its storyline unfolds.