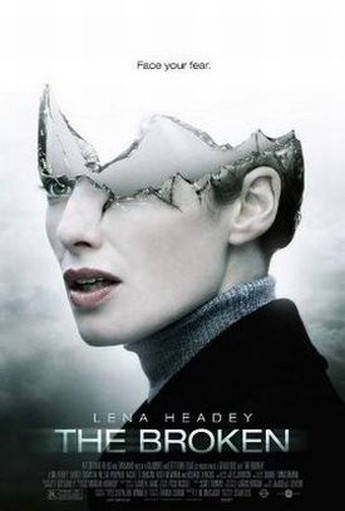 While the truth is, it’s all in the execution, some fans still claim the innate superiority of implied horror over shown horror. These people need to be forced, Clockwork Orange style, to watch this dreadful exercise in trying to generate chills by implication. The movie’s repeated, abysmal failures in this area – unless you are terrified by someone using the bathroom – will have you longing for the gentle subtleties of a cleaver to the forehead. For the first hour, the only moment of note is the car of central character Gina McVey (Headey) having a head-on crash with a taxi. I lost track of how many times this is repeated, apparently in lieu of giving us anything else of interest. McVey was distracted by a recent encounter with what appears to be her doppelganger, driving down a street; after the crash, she’s increasingly convinced her boyfriend (Poupaud) has been replaced by a double. And there’s a lot of broken mirrors. Are you shaken to your core by this storyline? Me neither.

How does this film fail? Let me count the ways… Most obviously: a failure to provide anything like a coherent narrative. The script never bothers to explain who the dopplegangers are, or why they are behaving like this. I read some explanations afterward, but if your story requires a Wikipedia synopsis as explanation, it has failed in its job. Additionally, it relies upon dramatically-convenient movie amnesia, a cheap plot trick barely a notch above “And it was all a dream.” Which would actually have been a more satisfactory denouement. Instead of actual frights, Ellis thinks he can get the same effect by accompanying everyday activities with music turned up very loud. Let me give you a clue, Sean – since you don’t seem to have one. You can’t. The only moment to work is a sequence in a shower, and it’s the only place where implied becomes explicit. Then it’s right back to hinting vaguely, both at fear and at what the hell is going on. This clearly wasn’t bargain-basement cinema, but scrapes the bottom of the barrel to become one of the worst significantly-budgeted movies I’ve seen in a long time.