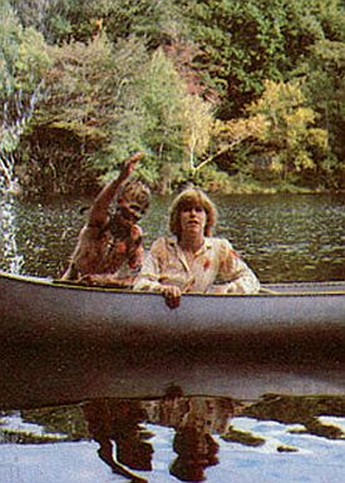 Thirty years since this came out, and here’s where I admit to never having seen it until now. The thing which stands out is, while Jason Vorhees in a hockey-mask is one of the most recognizable images of the entire horror genre, it doesn’t appear at all in the original movie. Indeed, Jason is hardly in it at all, except for the scene right at the end, which was about the only moment both Chris and I could actually remember with much clarity (the idea for that shocker actually came from make-up guy Tom Savini). It is straightforward in its approach: a group of teens are preparing Camp Crystal Lake for its reopening, more than two decades after two previous employees were brutally murdered. Over the course of one stormy night, they are stalked and dispatched by… Well, while I normally avoid spoilers, this hardly counts, given its iconic status, so… [spoiler alert, if you must] the mother of the late Jason Vorhees, who drowned at the camp, due to the inattention of the counsellers. As a result, she is opposed in general to the camp reopening, and particularly to any teenage sexuality.

Despite the almost-complete lack of any actual Jason, the basic concepts are firmly established in the opener here: the kills are definitely the focus here, with characterization and plot largely secondary. This is reflected by reviews – in contrast to, say, Halloween – best described as “sniffy”, or in the case of Gene Siskel, a lot worse. From a modern viewpoint, it’s difficult to see why – the effects are decent enough, yet hardly excessive. For instance, my first thought when victim #2 got her throat slit was surprise at how little blood flowed. While it’s difficult to imagine just what the “anybody, any time” approach seen here might have had on the audience at the time, it feels like it’s only in the last 20 minutes that things get going, with the “final girl” trying desperately to survive as Mrs. Vorhees seeks to finish the job. Credit goes to Harry Manfredini’s score (“Ki-ki-ki-ki… Ma-ma-ma-ma…”), which adds tension effectively. But this definitely feels more workmanlike than ground-breaking.

Body count: 10. Best kill: A very young, then unknown, Kevin Bacon gets an arrow through his neck from beneath the bed on which he is enjoying some post-coital relaxation.