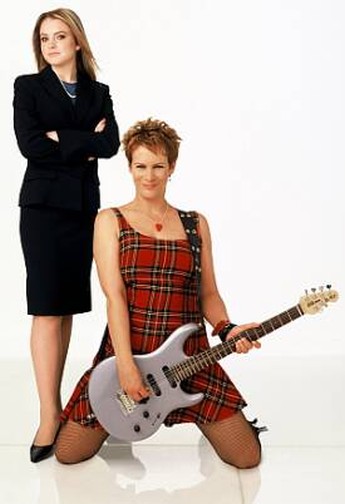 Five years ago, in the unlikely event I’d seen this, I would have torn into it for imaginative bankruptcy; why bother coming up with new ideas when you can rape your own back-catalogue for pointless remakes? However, I now share a house with a teenage daughter, and as Chris pointed out, we should have received a script credit, since half the lines of dialogue in the first act have been copied directly from our family “discussions”. Cue nervous laughter here, because believe me, it’s not funny, dammit. The other thing that saves the film is Curtis; after Tess and daughter Anna (Lohan, following her other piece of Disney self-abuse, The Parent Trap) switch bodies as the result of ill-defined magic, the impression Curtis gives of a hormonal, angst-ridden teen is pitch-perfect. And again, I know.

Curtis takes what could very easily have been painful schmaltz with hideous moralistic overtones, and elevates it to the point where I laughed more than I’m prepared to admit. This is balanced by Lohan’s bland performance as both mother and daughter, the annoying “battle of the bands” subplot, a vapid soundtrack and a predictability that runs through the film like a stick of rock. I mean, in my rewrite, Mom would have found out her daughter was pregnant. Or lesbian. Or a pothead. The potential is limitless – oddly enough, in the Disneyverse, it ain’t gonna go like that. But with Curtis in majestic form, it’s relative painless fluff.