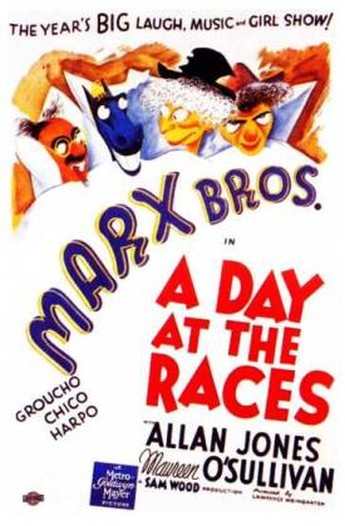 My first Marx Brothers film, and not quite what I expected – sure, there was Groucho’s laser-sharp wit, and the other brothers’ inspired clowning, but I didn’t anticipate lengthy musical numbers, which bring proceedings to a grinding halt, then overstay their welcome like an impervious relative. I’ll discount the questionable tone of the All God’s Chillun number as being a product of its era, but it’s an aspect of the film that has not aged well. [Just this week, I was amazed to rediscover Fawlty Towers using “nigger” for comic effect, so it’s hard to criticize Races for offending modern sensitivities]

The story has the brothers teaming up to save a sanitarium, with the aid of a somewhat-unwilling nag; Groucho’s depiction of horse doctor Hugo Z. Hackenbush, who pretends to be the two-legged variety is inspired, even if some of the routines feel like they were stage skits gone awry – his first encounter with Chico becomes almost as tedious as the songs. From a 2004 viewpoint, it is probably a much better 80-minute movie than a 110-minute one, but there’s enough verbal genius to make me open to seeing Duck Soup. Here’s Hackenbush, describing his medical training:
“To begin with I took four years at Vassar.”
“Vassar? But that’s a girls’ college.”
“I found that out the third year.”
He continues, “I’d have been there yet, but I tried out for the swimming team.” Almost 70 years later, that’s still funny.