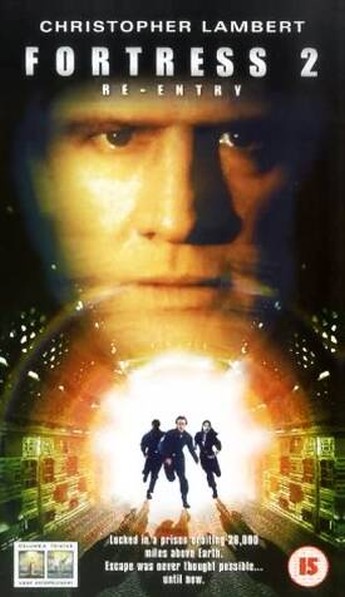 If, like me, the original Fortress is lost somewhere in the mists of time, you need not worry. Any connection here is limited, and this can be enjoyed – in the loosest sense – without having seen its predecessor. Once again, John Brennick (Lambert) is captured by the evil Men-tel corporation, and sent to their highest-security prison, now situated in Earth orbit. He must escape and rescue his wife and son before they too are enslaved. The results are almost exactly what you would guess, but impress in a couple of places: the outer-space location is well rendered, especially given the budget, and it has a wry sense of bureaucratic irony that occasionally borders on the Kafkaesque.

For example, when the authorities think Brennick is dead, they delete his file; when he subsequently returns, their computer security system won’t touch him, because as far as it’s concerned, he no longer exists. Moments like this, the cockroach-cam, and the prison TV station help keep interest ticking, and it’s a good thing, since more traditional elements – plot and acting – largely don’t, with huge chunks of the storyline not making sense. However, particularly bad is Pam Grier, who chews the scenery with reckless abandon and to little effect; Lambert is…precisely as you’d imagine. I went into this with low expectations, and it marginally surpassed them; it’s probably best if you do the same.