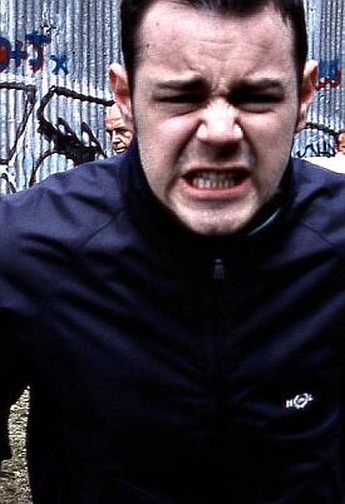 More than five years after leaving Britain, how alien this culture seems – even though for a decade, I travelled twice a day past Millwall’s stadium. Now, I have to put subtitles on, to be certain what was being said half the time. It’s a look into the culture and lives of football hooligan, centered on Tommy (Dyer), part of the Chelsea crew under Billy (Harper), whom even Tommy calls a “total fucking psycho.” But Tommy is plagued by doubts + nightmares where he sees himself, battered more comprehensively than a portion of cod, lying in the gutter. This is, in part, because of his role in cracking a member of the rival Millwall firm upside the head with a bat [cricket, rather than baseball – this being British, y’know]. And guess who Chelsea have just drawn in the FA Cup?

Does it glamourize violence? Hell, yes, though it does have more going on beneath the surface; just not quite enough, perhaps. It doesn’t delve into the psychology of why, and without that, these characters remain cyphers. Still, as an adrenaline rush, it undeniably has its effective moments; Billy is as nightmarish a creation of disaffected working-class culture as you can imagine, even if his best scene is ripped almost wholesale from Goodfellas. Pointedly, Tommy claims to live for sex and violence, but seems pretty pathetic at both. Though I suspect such subtleties will soar wildly over the head of the many wannabe thugs who will doubtless watch this repeatedly, and remember just the hero’s final line: “Was it all worth it? ‘Course it fucking was!”