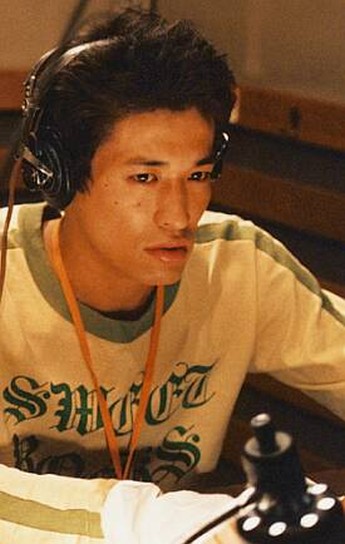 I think this may be the best-written horror film I’ve seen in a long time; how things unfold and information gets revealed, is sublime. It centers around Studio 6, a rarely-used location in a radio station. When a night-time talk program has to use it, almost at once, strange things start happening, such as calls to the show being interrupted by an untraceable woman’s voice. This particularly affects host Shogo (Sato), who finds the subjects brought up by listeners strike too close to home for his comfort. As the program moves on, secrets are divulged, the show spirals out of Shogo’s control – his producer loves the spooky angles, and wants to make more of them – and he begins to feel as if there’s some kind of conspiracy in place, with everyone plotting his downfall.

Given this is almost a one-set film (there are a few flashbacks outside the studio), with almost no gore, the effective creepiness it generates must be credited to a combination of the fine script and good acting, particularly from Sato. Shogo initially seems like a nice guy, who bends the truth only to be able to sympathize with his listeners, but it gradually becomes clear he has his own moral weaknesses. Though impressively, he never becomes the villain of the piece, remaining a victim as much of his own doubts and guilt as anything. There’s one great scene where a humble, inoffensive newsreader becomes – in Sato’s mind, at least – a prosecuting attorney, harrying him relentlessly, symbolizing how everything has become a threat. That sums up the paranoia here and, combined with the inexplicable events, makes for a suspenseful, highly-effective movie, even at just 74 minutes long.